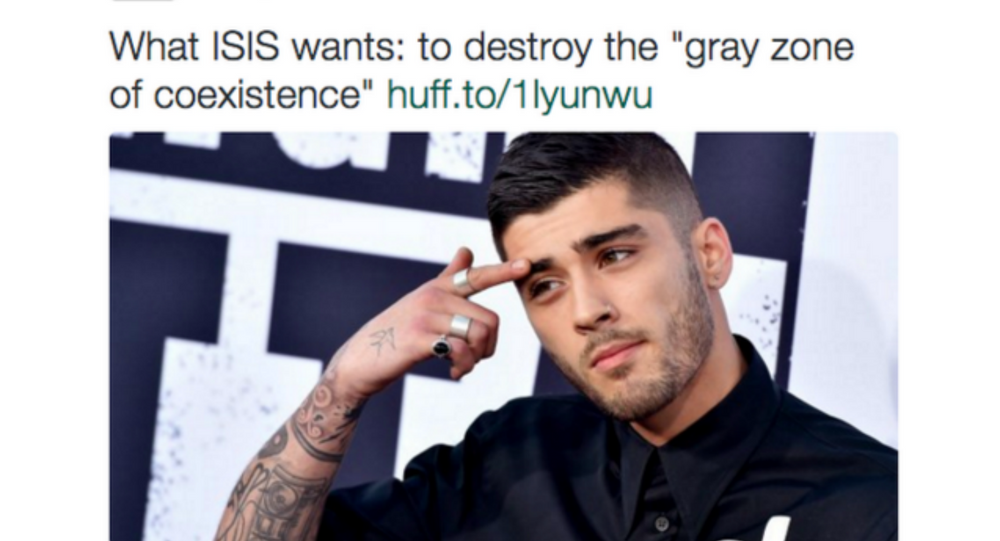 On Friday, a photo of Zayn Malik, the ex-member of One Direction was used in a tweet the Huffington Post sent out titled “What ISIS Wants,” implying either that the terror organization are boy band fans, or more sinisterly, that the star had joined the extremist group.

© Flickr / Democracy Chronicles
Vast Majority of ISIL-Linked Terrorist Suspects Charged in US Are Americans
The tweet was quickly deleted after users began pointing out their massive error, and an apology was issued by the news organization.

The Huffington Post tweeted out a screenshot of their mistake, along with the statement, “We apologize for the original image here. Zayn Malik is mentioned in the story, but is obviously not part of ISIS.”

Malik is in fact mentioned in the article, making the unfortunate tweet somewhat more understandable. It is about “the gray zone of coexistence,” and cites the teen heartthrob as an example of a famous Muslim who has rejected radical extremism.

“The refugees fleeing Syria make it more than crystal clear that the Islamic State is not creating any kind of haven for Islam. But if you want a more relatable face of the "gray zone of coexistence" — a success story you've definitely heard of — consider international pop-sensation and former One Direction singer Zayn Malik.” Jason Linkins wrote in the article.

Last week, Malik was also slammed on Twitter when an insane rumor circulated that he was one of the gunmen in the Paris attacks, because the internet is insane.

© Sputnik / Natalya Novikova
Hugs for Peace: Muslim Asks Parisians to Embrace Him After Terror Attacks
Satirical website Huzlers had posted an article claiming that the reason for Malik’s departure from the boy band was to secretly join ISIS, and it spread like wildfire, receiving nearly 10,000 ‘likes’ on Facebook.

On Wednesday a sneak peek was released of Malik’s first interview since leaving One Direction.

“I’m just a normal person as well as following my religion, and doing all the normal things that everybody else does. I love music and I get tattoos and I make mistakes, and I’ve had to go through relationships and break up relationships. I feel proud that people actually look to me and can see themselves in that,” he stated.