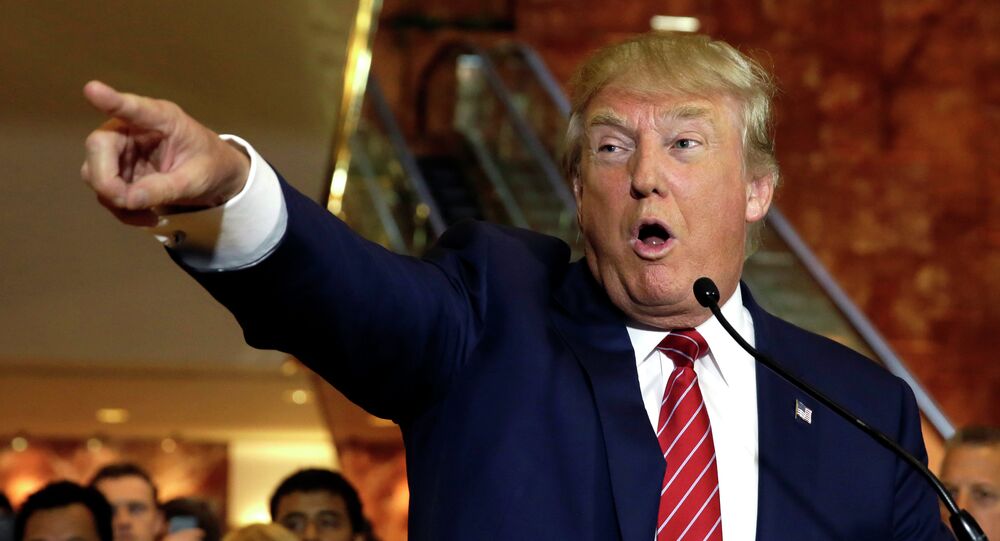 The Republican presidential hopeful said he would back a plan for a mandatory database of Muslims.

© AP Photo / Charlie Neibergall
Sixth Sense? Trump Claims When It Comes to Terrorism, He 'Can Feel It'
Following the brutal Paris attacks, Donald Trump, who leads in polls among the Republican Party's nominees by a wide margin, claimed Americans should consider creation of a Muslim database in the US and set up surveillance on all the mosques across the country.

In a recent interview with Yahoo Politics, the real estate mogul said that "drastic measures" were needed to meet the "radical Islamic terrorism" threat in the US after cruel terror attacks in the French capital and considered an aggressive take on Muslim community in the country.

For instance, he did not count out possibility of warrantless searches of Muslims across the entire country in future in terms of combat against jihadists in the US.

"We're going to have to do things that we never did before. And some people are going to be upset about it, but I think that now everybody is feeling that security is going to rule," Trump said referring to possible counter-terror measures.

Answering the question about creation of database containing data on all US Muslims or issuing to all country's Islamic residents special ID cards, where their religious beliefs would be marked, he hinted that such steps would be possible as well.

"I would certainly implement that. Absolutely," Trump told NBC News commenting on a plan for the database of Muslims. Asked whether Muslims would be required to register, he replied, "they have to be."

© Sputnik / Maria Tabak
US Republican Candidates Slam Trump's Anti-Immigration Plan
Trump evaded answering a followup question regarding how this move could be seen as being different from a Nazi Germany requirement for Jews to register, saying "you tell me."

He also assumed there is a need for a federal surveillance program on Muslims in the US like the one that was shut down last year after causing significant media backlash. He stressed that Ray Kelly, a former NYPD Commissioner, who was developing the previous project, would take a position in the US administration, if Trump won the election.

"Ray did a fab job as commissioner and, sure, Ray would be somebody I'd certainly consider."

The TV personality has recently stepped up with an idea to close all the mosques across the state, according to media reports.

So far, controversies that the Republican Party candidate fuels up regularly seem to play in his hands — according to the fresh data, he leads the polls among other Republican nominees with 38 percent of votes, surpassing his nearest competitor Ben Carson by solid 19 percent.

Also, the US Congress passed a bill on Thursday requiring strengthening of vetting procedures for Syrian refugees looking into the opportunity to enter the US, despite Barack Obama's opposition.

Hispanic Group Offers $5,000 For Shouting 'Racist' at Trump During SNL