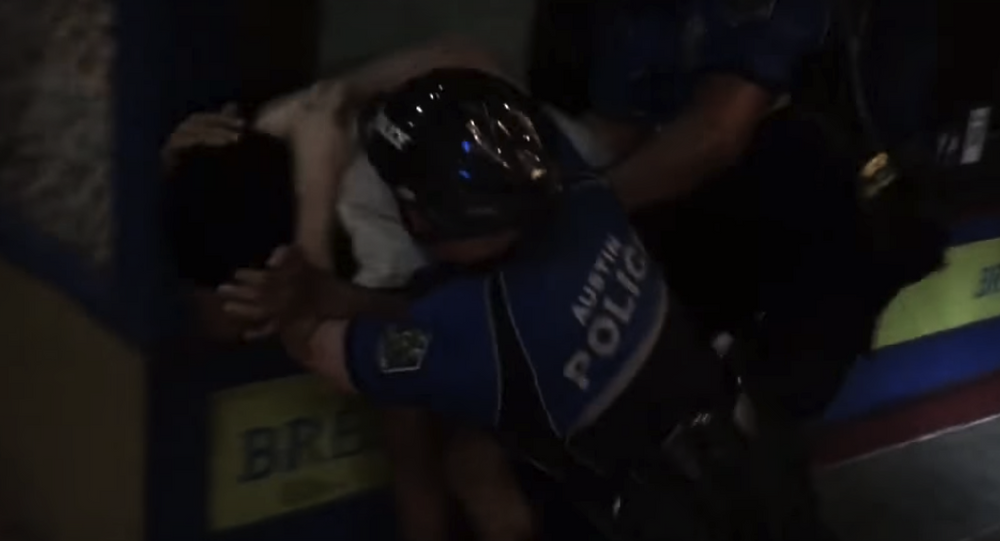 Three people were arrested by police in Austin after jaywalking in a violent incident that was caught on video Friday.

After the three spent the night in jail, two were released and had their charges dropped while the other remained detained.

Jeremy Kingg, one of the arrested men, told ATTN: news that the group had called out to police at about 2:30 a.m. because they did not know if they were allowed to cross. When police didn’t respond, they crossed the street.

Kingg said several police officers then approached the group and arrested three of them. In the video, one of the jaywalkers can be seen getting punched by police while being told to “stop resisting.”

Kingg says that Matthew Wallace and Lourdes Glen were also charged with "walking against the light."

© Sputnik / Sergey Pyatakov
Hollywood Backs Tarantino as More Conservatives Slam Director Over Police Brutality
Kingg told ATTN: that Glen was taken to an emergency room while in custody "because her heart was beating too fast" and was being denied her asthma medication. She was released Friday and her charges were dismissed.

Wallace was reportedly charged with resisting arrest and remains in jail.

"We were just walking," Kingg told ATTN:. "I wasn't doing anything to be a threat and they started using extreme force."

In a statement, the Austin Police Department said it was investigating the incident.

"The Chain of Command will review the Response to Resistance and the incident to determine what led up to the events captured in the video and whether the officer’s actions were in compliance with APD policy," the statement read.

Hollywood Backs Tarantino, As Conservatives Slam Him Over Police Brutality