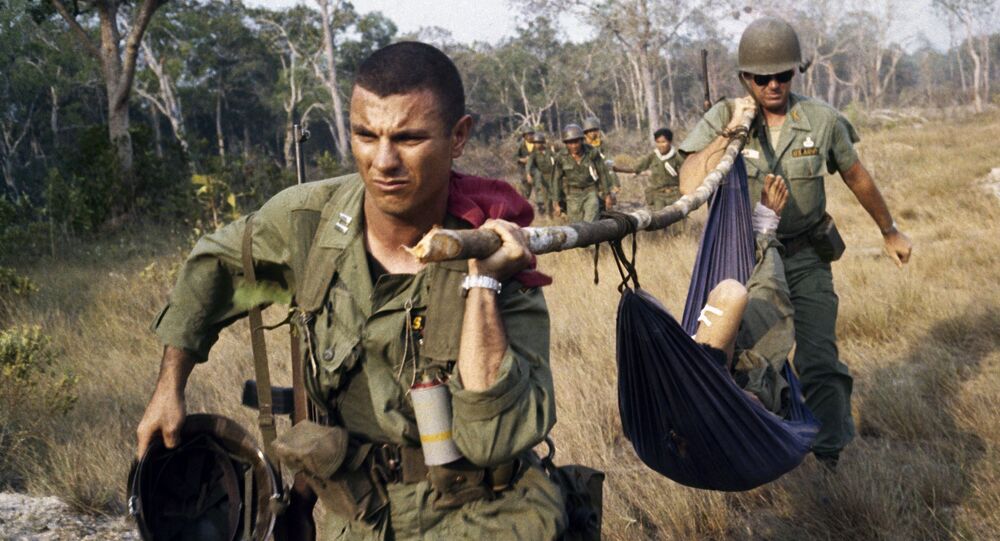 No matter how militarily mighty the United States considers itself, there are quite a few battles it would have been better to have stayed out of. Robert Farley, an American expert in national security has compiled a list of battles the country lost, as a little reminder before it jumps head-first into its next foreign adventure.

“As we would expect of any country, not all of America’s wars have been wisely fought, and not all of them were wise to fight,” Farley wrote in an article for The National Interest magazine.

Here is the list of battles the author thinks his country should had kept out of.

The tensions that caused the War of 1812 (June 18, 1812 – February 17, 1815) arose from the French revolutionary and Napoleonic Wars (1792–1815). During this nearly constant conflict between France and Britain, American interests were injured by the two countries’ endeavors to block the United States from trading with each other's adversary.

© AP Photo /
Battle of New Orleans showing General Andrew Jackson and his troops overcoming the British , in 1815, and scoring a victory which gave him a place of great popularity whit the people

The causes of the war also included the Royal Navy’s impressment of American seamen and America’s desire to expand its territory.

The United States suffered many costly defeats at the hands of British, Canadian and Native American troops over the course of the War of 1812, including the capture and burning of the nation’s capital, Washington, D.C., in August 1814.

“It turned out that the United States was ill-prepared for the conflict,” Farley concludes. “The invasions of Canada failed; US Navy frigates scored some notable successes, but in general the Royal Navy did what it wanted, when it wanted; the British burned the American capital, with only heroic resistance preventing the incineration of Baltimore. The Republic nearly collapsed from internal dissension before Washington and London made peace.”

The Great Sioux War of 1876, also known as the Black Hills War, was a series of battles and negotiations which occurred between 1876 and 1877 involving the Native American tribes of Lakota Sioux and Northern Cheyenne against the United States.

As gold was discovered in the Black Hills, settlers began to encroach onto Native American lands.

“The US government was unable (and largely unwilling) to restrict white migration into the Black Hills, and after unproductive negotiation simply decided to seize some of the most valuable area,” Farley says.

“The war resulted in one of the most serious US military defeats of the Indian Wars, the annihilation of the Seventh Cavalry at the Battle of Little Bighorn.”

“Eventually, however, a combination of military and diplomatic efforts forced most of the Cheyenne and Sioux to surrender, apart from a portion that fled to Canada.”

Sporadic fighting would continue for another fifteen years or so the author says.

In the end, the US government “pacified” the Cheyenne and Sioux and assumed full control over the eastern half of what would become South Dakota.

“The death and destruction caused by the war provided an appropriate coda for US mistreatment of Native American tribes across the 19th century,” he furthermore states.

The Great War (World War I)

When the European continent erupted in conflict in 1914, President Wilson declared America's neutrality.

© AP Photo /
Soldiers returned to the U.S. from France after the Great War march in a homecoming parade in Madison Square, New York City, 1918

“German submarines and an ill-advised effort on the part of the German foreign service to enlist Mexico’s support in the war changed that position,” Farley says.

“In eighteen months of war (with the most intense fighting concentrated in the summer of 1918), 116,000 Americans died. Scholars still debate whether US intervention was decisive, but in the end the war resulted in the collapse of four empires (Germany, Russia, Ottoman, Austria-Hungary) and the aggrandizement of two others (Britain and France) without resolving any of the central issues of dispute.”

The Vietnam War was a long, costly armed conflict that pitted the communist regime of North Vietnam and its southern allies, known as the Viet Cong, against South Vietnam and its principal ally, the United States.

The war began in 1954 (though conflict in the region stretched back to the mid-1940s), after the rise to power of Ho Chi Minh and his communist Viet Minh party in North Vietnam, and continued against the backdrop of an intense Cold War between two global superpowers: the United States and the Soviet Union.

The war took the lives of 58,000 Americans and ended with the withdrawal of US forces in 1973 and the unification of Vietnam under Communist control two years later.

The conflict led to bitter divisions among Americans, both before and after President Richard Nixon ordered the withdrawal.

According to a survey by the Veterans Administration, some 500,000 of the 3 million troops who served in Vietnam suffered from post-traumatic stress disorder, and rates of divorce, suicide, alcoholism and drug addiction were markedly higher among veterans.

“In 2003, the United States invaded Iraq in order to topple the regime of Saddam Hussein, establish a friendly, democratic state in its place, and prevent the distribution of weapons of mass destruction to Iraqi-affiliated terrorist networks. In hindsight, every aspect of that sentence seems absurd,” Farley says.

According to official estimates, a total of 4,493 US service members were killed in Iraq between 2003 and 2014. Official figures claim 32,021 were wounded. However, according to Antiwar.com website, the unofficial estimation shows as much as 100,000.

Given the above, Farly concludes that “the United States should take great care to stay out of unnecessary wars, and aloof from foreign entanglements. America’s leaders would be best advised to pay great heed to this advice when they consider further foreign adventures.”

Ron Paul: Use the Debt Ceiling Debate to Defund Constant US Wars

US Lacks Will, Strategy to Win Wars It Started