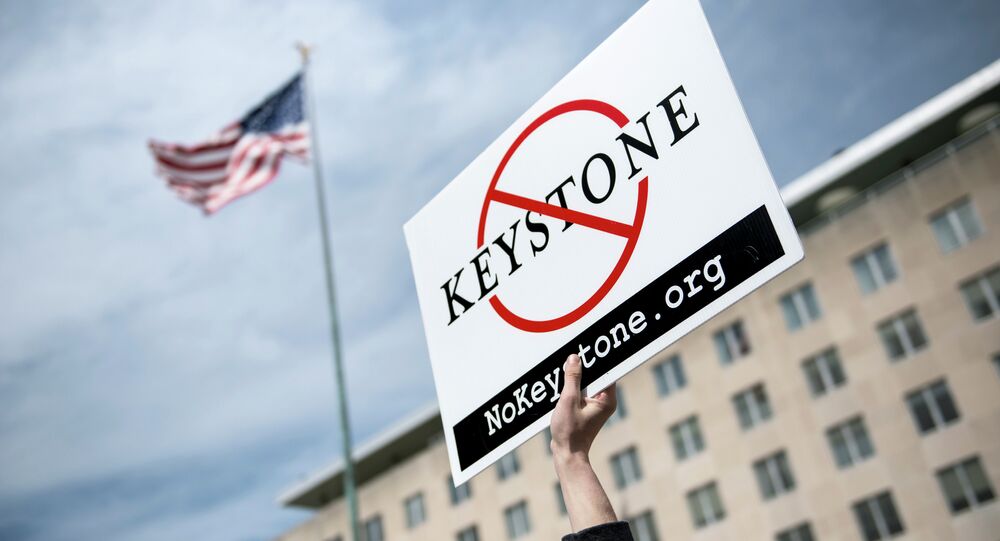 With President Obama announcing Friday morning that his administration would reject the construction of the Keystone Xl oil pipeline, climate activist Jamie Henn praised the decision, suggesting it served as a great victory for the environmental movement in pressuring government, and a sign of the world standing up to big oil.

© AP Photo / Evan Vucci
Obama Rejects Keystone XL Pipeline Proposal
Speaking to Sputnik, Henn, the co-founder and Strategy and Communications Director for global climate movement 350.org, said that the project's defeat "marks and incredible victory for people across the country and around the world who have fought Keystone XL for the past five years."

Furthermore, with "President Obama [becoming] the first world leader to reject a project because of its effect on the climate," Henn noted that he believes that "this sends a strong signal that the world is finally beginning to stand up to big oil and move in the right direction. We couldn't be more thrilled…It's an incredible win for the climate movement and for everybody else that waged this fight."

The activist recalled that "when we started this, everybody counted us out, and said there's no way you could block a major project like this. Everybody thought that the pipeline would be approved. Prime Minister Stephen Harper, [who stepped down earlier this week following electoral defeat] said that he would not accept a rejection. But then that began to change. People began organizing and marching in the streets and demanding action, and lo and behold, the political winds began to shift, and now it's a rejection. So it's a huge example of how organizing really works and that sometimes people can actually push and make change."

The Keystone XL Pipeline project, a politically sensitive project subject to a seven-year review amid a debate on the pipeline's environmental impact, would have been 1,897 km long, and would have carried about 830,00 barrels-worth of oil a day from tar sands in Alberta, Canada to refineries in the US, had it been completed.