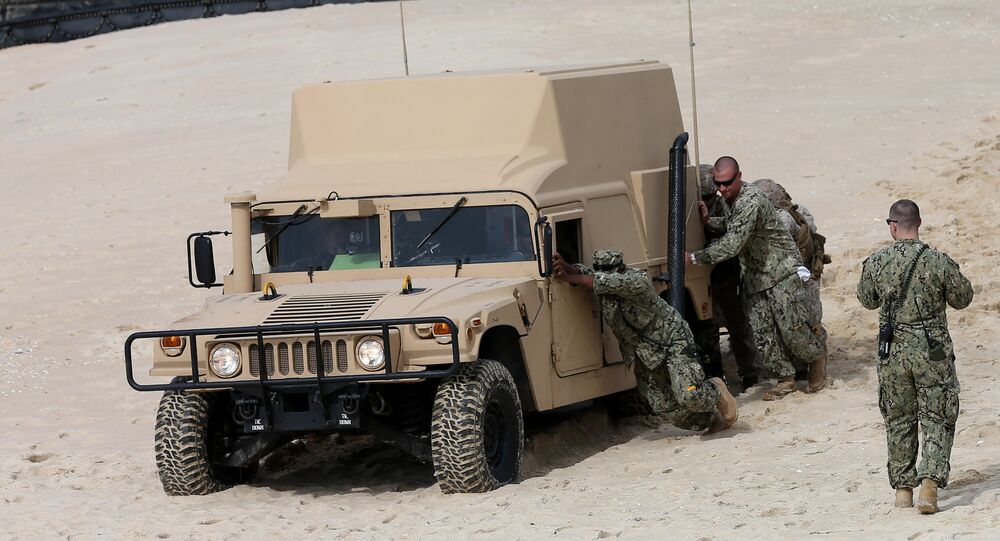 US Military Gets 'Kindergarten' Grade According to Influential Report

James Jay Carafano, America’s leading expert in national security and foreign policy challenges, has criticized the current state of the US military, calling it “not a bad grade for kindergarten,” but certainly “not much to show for a commander-in-chief after seven years of stewardship over America’s military.”

© AP Photo / Mary Altaffer
US On Road To Third World
His comments on The Heritage Foundation website follow the assessments of the US military index, released by the Foundation in its “2016 Index of US Military Strength” report.

The report concluded that the US’ military posture is rated as “marginal” for its Navy, Air Force, Marine Corps and Nuclear power, trending toward “weak”, and is just plain “weak” for the Army.

“The Army’s score dropped from “marginal” last year to “weak” this year, a development that can be attributed primarily to a drop in capacity, as the Army has fewer BCTs (Basic Combat Training) ready for deployment abroad. The Army’s capability and readiness scores remained static over the past year as the service continued to struggle with recouping readiness levels after years of budget cuts,” the analysis says.

The index for the Navy is marginal for capacity, “with scores of “weak” for capability (due largely to old platforms and troubled modernization programs)”.

© AP Photo / Lee Jin-man
Boots on the Ground, But Details Still Unclear: Pentagon to Launch 'Direct Action' in Syria and Iraq
“The Navy is currently just able to meet operational requirements. Moving forward, the fleet will be further strained to meet operational demands, especially as Reagan-era platforms increasingly near the end of their service lives.”

The US Air Force’s aggregate score of “marginal” is a decline from the 2015 Index score of “strong”, driven primarily by degradation in capability and readiness, it says.

While the fighting competence of the US Marine Corps service is superb, it is hampered by aging equipment; troubled replacement programs for its key ground vehicles (particularly its amphibious personnel carriers); and a shrinking force. The progress the Corps has made in replacing its rotary-wing aircraft has been a notable bright spot in its otherwise uninspiring modernization portfolio.

© AFP 2020 / AHMAD AL-RUBAYE
Profit Fueled? Defense Contractors to Make Billions Off US Troops in Syria
Modernization, testing, and investment in the intellectual/talent underpinnings of the US nuclear sector are the chief problems facing America’s nuclear enterprise. Delivery platforms are good, but the force depends on a very limited set of weapons (in number of designs) and models that are quite old, in stark contrast to the aggressive programs of competitor states.

“Continued reliance on legacy systems such as the B-52 will eventually diminish the effectiveness of the nuclear triad and lead to the degradation of the nation’s strategic deterrence,” the document said.

Commenting on all the above, James Jay Carafano wrote that “that might not be a bad grade for kindergarten kids to bring home. They have a couple of years before they have to apply to Harvard. But, that’s not much to show for a commander-in-chief after seven years of stewardship over America’s military.”

© Sputnik
US Spends $35Bln on Aid Programs, But Can You Guess Where the Money Goes?
The expert also commented on another of the report's conclusions that “the shift (since last year’s Index) in two services—the Army and Air Force—to a lower category in the course of a single year is surprising and should be seen as evidence of the rapidly accumulating effects of inadequate funding during a time of higher operational demand and policies that have traded long-term health for near-term readiness.”

“While there is plenty to debate over how the Pentagon spends our tax dollars and a case to made for serious reforms,” Carafano wrote, “the index makes clear that the mismatch between capabilities and missions is a much bigger problem than just balancing the check book.”

“Since the commander-in-chief has the preponderance of responsibility for providing for the common defense, the nation is going to need a serious presidential team with a serious plan to set things right,” the expert concluded.

US Military Getting Smaller and Older as Adversaries Develop Capabilities