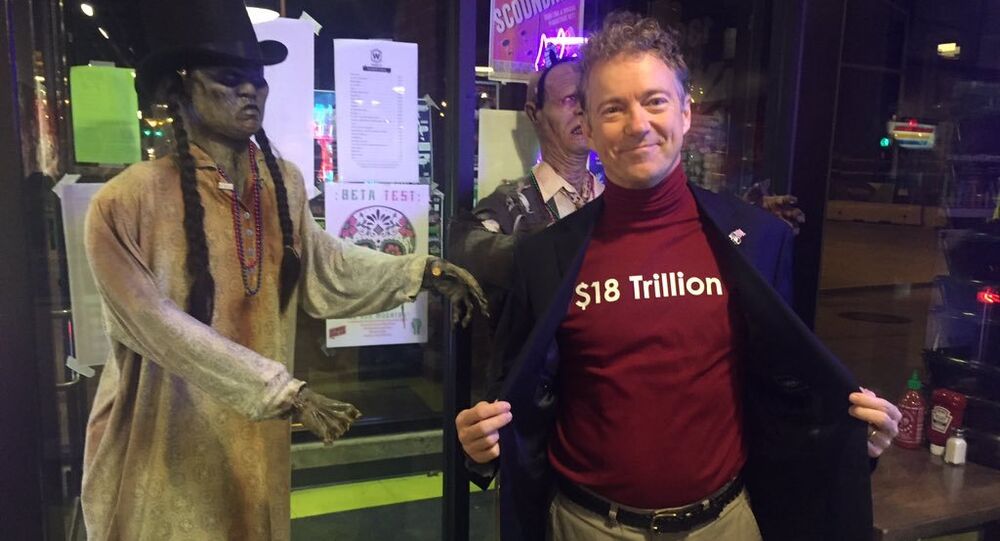 Rand Paul, a presidential candidate from the US Republican party, emerged at a Halloween party in Iowa in what appeared to be a casual-looking red turtleneck shirt and khakis; only the shirt featured the words '$18 Trillion', a reference the country's exorbitant federal debt.

.@RandPaul gets ready to judge a costume contest in Des Moines. His scary costume? The national debt. (18 Trillion) pic.twitter.com/iF2nSrVxIx

A senator from Kentucky, Paul arrived in Iowa as part of his election campaign.

"Stopped at Zombie Burger in Des Moines. I think my costume is scarier than these zombies", the senator said on his Twitter page.

.@RandPaul poses with all the Halloween costume contestants #IACaucus pic.twitter.com/fAxvNNI4W1

The comments came as Paul paid a visit to a local fast food restaurant, which was decorated in zombie-style paraphernalia.

Having a great time at my Halloween party in Iowa! My costume is still the scariest. pic.twitter.com/w8mTRd7cK2

According to US media, a costume party at Buzzard Billy's in downtown Des Moines attracted a crowd of at least seventy people.

Earlier, it was reported that the US Senate on Friday passed a law according to which the country's debt limit will automatically increase in March 2017.

Additionally, the Senate approved to raise spending by $80 billion over two years, which doesn't include a $32 billion increase in an emergency war fund.