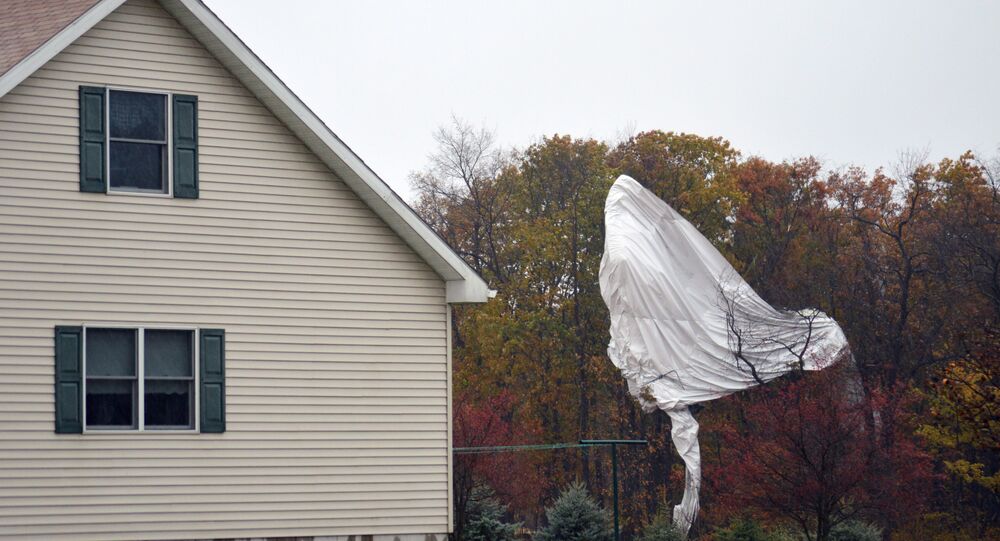 A runaway US military blimp soared above the American East Coast on Wednesday, inspiring thousands of jokes across social media. But the balloon’s creator, Raytheon, isn’t laughing, worried that the blimp may have just burst the bubble of its expanding profit margin.

Once upon a time, the Pentagon had grand visions for the security of the Eastern seaboard. To defend against incoming missiles, the military put together the Joint Land Attack Cruise Missile Defense Elevated Netted Sensor System (JLENS) program, which envisioned 36 massive surveillance blimps dotting the coast from Maine to Florida.

But, even for the Pentagon, blimps are expensive. Costing roughly $1.4 billion a pop – no pun intended – military brass thought it best to start with two and set them aloft on a three-year test run.

"There’s a lot of interest internationally, particularly now that they’re up and flying," Douglas Burgess, director of persistent surveillance programs at Raytheon, said during an interview with Shepard Media two weeks ago.

"For us…[we’re waiting] to get the A+, I call it, on the scorecard from NORAD about its operational utility here on the East coast. So that’s really our near-term focus."

When one of those blimps broke loose from its moorings in Maryland, putting a pair of F-16s in hot pursuit, it may have taken Raytheon’s hopes and dreams with it.

A $1 billion balloon crash landing in the Pennsylvania countryside, knocking out power for 21,000 people in the process, doesn’t exactly scream "bestseller."

In a promotional video released by the company last year, Raytheon boasts that the JLENS combination of "innovative technology" with "old-world invention" provides 360-degree radar detection, and that floating at heights of 10,000 feet, the blimps are held secure by a 1 1/8 inch cable "strong enough to withstand winds greater than 100 knots."

At least one of those claims has now been proven untrue.

"The chance of that happening [the tether breaking] is very small because the tether is made of Vectran and has withstood storms in excess of 100 knots," reads an FAQ from Raytheon.

"However, in the unlikely event it does happen, there are a number of procedures and systems in place which are designed to bring the aerostat down in a safe manner."

© AP Photo / U.S. Border Patrol
Military Blimps from Afghan, Iraq Wars Now Patrolling US Border
But no procedure will refund the $1 billion wasted on what ended up in tatters in the Pennsylvania treetops, no better than any run-of-the-mill party balloon.

Will Raytheon be able to recover? It still has a number of lobbyists in Washington to may be able to salvage the JLENS program. Similar blimps have also been deployed during American combat operations in the Middle East, and given recent statements from Defense Secretary Ash Carter, those conflicts don’t show any sign of winding down.

Still, one of the most public embarrassments for the US military in recent memory is also bound to be a major blow to Raytheon.

Is it a Bird? Is it a Plane? World's Largest Aircraft Seeking Investors