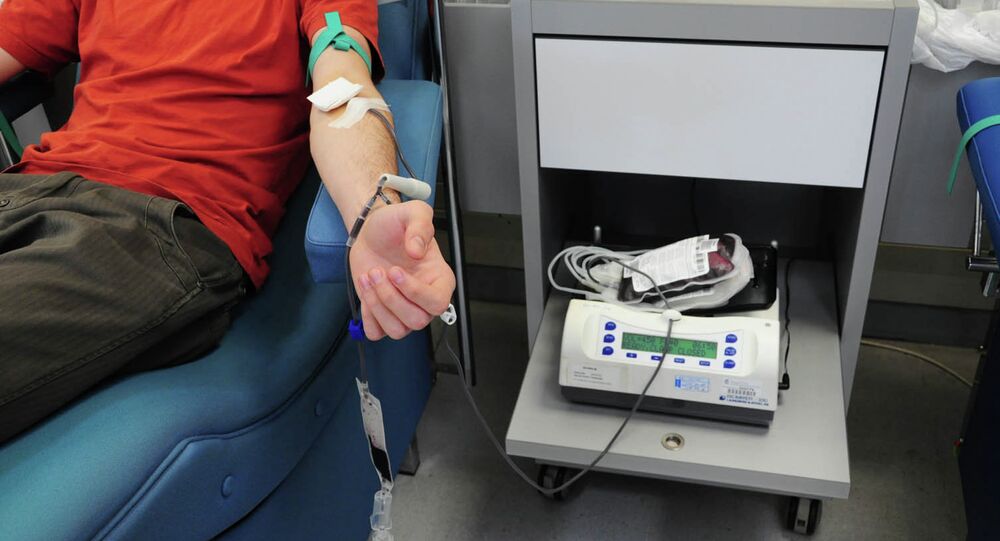 An Alabama judge has come up with a creative, and what some might call downright looney, option for poor people to avoid jail if they can’t pay their fines — pay in blood.

Audio obtained by the Southern Poverty Law Center from a blood drive on September 17, captured Judge Marvin Wiggins of Marion telling destitute people that they can avoid jail and receive a “discount” on their fines by donating blood.

“Good morning, ladies and gentlemen,” began Judge Wiggins in the recording. “For your consideration, there’s a blood drive outside,” he continued. “If you don’t have any money, go out there and give blood and bring in a receipt indicating you gave blood.”

If one of the many packing his courtroom over unpaid fines and fees choose not to have a syringe remove blood from their bodies, or if they could not donate blood (there are is a long list of reasons a person’s blood may be denied), Wiggins concluded, “the sheriff has enough handcuffs.”

Those who were able to give blood and brought him a receipt received $100 off of their fines and were allowed to remain free.

A man who owed money to the court and was present that day recounted to the New York Times seeing an older gentleman pass out after his blood was drawn.

© AP Photo / Carlos Osorio, File
Poverty Grows in US Defying More Spending on Programs
In 1983, the Supreme Court ruled in Bearden v. Georgia that judges may not imprison people who are too poor to pay off legal debts – however, the ACLU filed a lawsuit on Wednesday against a Mississippi town for doing just that.

While “debtors prisons” may be a thing of the past, the imprisonment of people for being poor is still widespread, as cities and town’s aggressively pursue fines and fees to raise funds.

Typically, judges will allow those who cannot afford their fees to pay off their debts by performing a community service, but specifically calling for the blood of the poor is being called a “violation of bodily integrity,” by the SPLC who has filed an ethics complaint.

The company hosting the blood drive, LifeSouth Community Blood Centers, was aware of the arrangement with the judge according to the man who took the recording, and they recently made headlines for losing a $4 million dollar judgement for providing HIV positive blood for a transfusion.

“We appreciate the judge’s attempt to support the community’s blood needs,” Jill Evans, a vice president for LifeSouth, which is based in Gainesville, Florida, told the New York Times. “However, LifeSouth prohibits blood donations from being considered as community service because it is potentially an unacceptable incentive for a volunteer donor.”

After receiving complaints, the company ultimately discarded most of the blood collected that day.

The SPLC has stated that in the cases they have reviewed, none of those who gave blood received the $100 discount that they were promised, although no one was arrested that day.