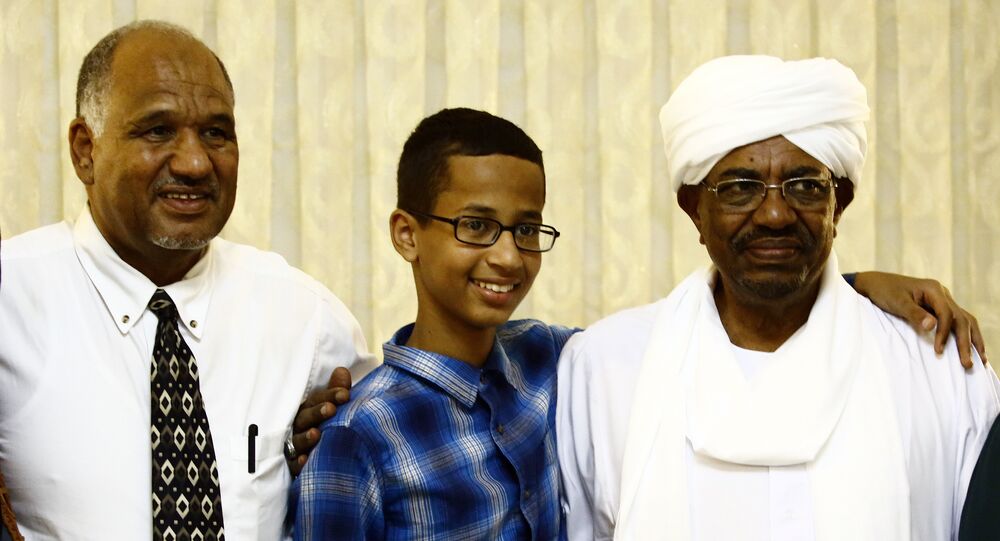 Ahmed Mohamed, the 14-year-old Texan who was briefly arrested by school police after a homemade clock he brought to school was thought to be a bomb, met Sudan’s President Omar al-Bashir in Khartoum late Wednesday.

Ahmed told the media he was “extremely delighted” to meet Bashir and said he hoped to meet the dictator of Sudan again “with a new invention and success,” reported the Sudan Tribune.

Ahmed and family were received at the Sudanese Presidential Residence.

The meeting raised eyebrows among typically hysterical Islamophobic US conservatives, and some Ahmed supporters.

Ahmed’s father, Mohamed Hassan al-Sufi, is a Sudanese immigrant to the United States, and a former presidential candidate in Sudan who ran against Bashir last year. Al-Sufi was excluded  from the 2010 election for not gathering the required number of signatures. At the time, Al-Sufi accused the National Elections Commission and the National Congress Party of colluding to exclude him from the election.

"The NEC did not want me in the race under pressure from the NCP and Bashir. They know I have wide support among my tribe, farmers, Sufi sects and expatriates," Ahmed’s father told the Sudan Tribune in 2010.

Bashir is wanted on an International Criminal Court warrant for allegedly orchestrating war crimes, genocide and crimes against humanity during the Darfur conflict starting in 2003. He has ruled unchallenged for 26 years.

There appeared to be little signal of animosity between Al-Sufi and Bashir Wednesday, however. The Sudan Tribune reported Al-Sufi attended the meeting and told reporters that he hopes the youth of the country will “write a new history for an advanced and developed Sudan.”

© AP Photo / Brandon Wade
Ahmed Mohamed, 14, center, and his father Mohamed Elhassan Mohamed, right, look on as their attorney Linda Moreno, left, delivers a statement about the arrest of Ahmed during a news conference, Wednesday, September 16, 2015, in Irving, Texas

Osama Bin Laden lived in Sudan during the 1990s after leaving Afghanistan, where he was backed by the CIA to fight the Soviet Union.

Ahmed posted many images from his trip to the Muslim world on social media, including a picture with his male family members performing umrah next to the Kabaa inside Mecca’s Grand Mosque, and with students in Qatar.