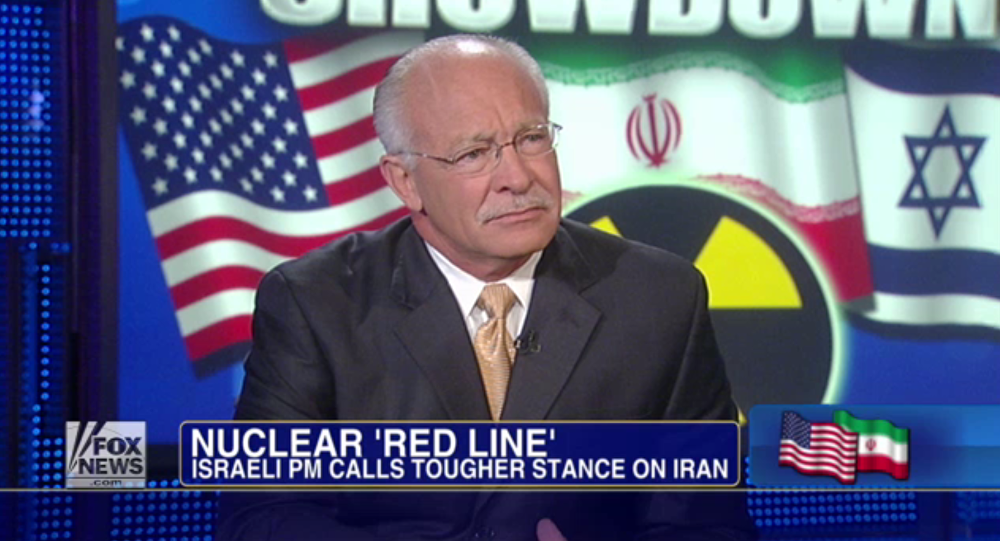 A recurring Fox News commentator who had been lying for years about his employment with the Central Intelligence Agency was arrested Thursday for falsely claiming he was working as a “Outside Paramilitary Special Operations Officer” with the Agency for four decades.

Wayne Simmons, a 62-year-old Annapolis, Maryland resident, was arrested by the FBI after an unsealed grand jury indictment charged him with committing major fraud, wire fraud, and false statements to the government.

“The Spy who Faked me”

Simmons’ backstory for Fox News, for whom he began appearing as an on-air expert in 2002, alleged that he had worked for the CIA beginning in 1973 and, according to his online biography, that he “spearheaded Deep Cover Intel Operations against some of the world’s most dangerous drug cartels and arms smugglers from Central and South America and the Middle East.” Elsewhere, he has claimed he worked for the CIA in roles fighting “cyber-terrorists” and corporate and industrial espionage.

Simmons, using his fake employment history to bolster his credibility as an ex-CIA consultant on Fox News, also served as a consultant to the Bush II White House on the Military Commissions Act of 2006.

Simmons was allegedly hired as the “Human Terrain System Team leader” for a still-unnamed government contractor in 2008, gaining access to training at an Army facility. Two years later, in 2010, he was hired by a different unnamed government subcontractor.

In both positions, Simmons was able to maintain security clearance by claiming he had been recruited by the CIA in 1973, and that prior arrests and criminal convictions on his record were directly related to his alleged intelligence work.

“Worst person in the world”

On an October 24, 2006 episode of Countdown with Keith Olbermann, the MSNBC host dubbed Simmons the “#1 Worst Person” in the world, something that Simmons wore as a badge of honor on his biographical website.

"The winner: former CIA agent Wayne Simmons on Fox News, saying the football stadium bomb hoax was, quote, ‘the perfect example of how vital the president's domestic eavesdropping program and the passage of the Military Commissions Act are,’” Olbermann said on his show. “Of course they're vital, Wayne. They enable the government to spread false rumors about plots that aren't by non-terrorists that anybody over the age of 7 1/2 should have been able to see were crap, so they can try to scare people into voting Republican.”

This particular 2006 bomb scare hoax that Simmons used to scare Fox News viewers into justifying the Bush Administration's’ military commissions and illegal wiretapping program originated on the 4chan message board, by one Jake Brahm of Wisconsin, who was later prosecuted for the false threats. Brahm, posting anonymously on 4chan, claimed that the bombings would be praised by Osama bin Laden as “America’s Hiroshima.”

“Someone at the FBI really fell down”

On November 13, 2007, Simmons appeared on The Big Story with John Gibson and Heather Nauert to discuss how 37-year-old Nada Nadim Prouty, an immigrant from Lebanon, was able to get a job as an FBI field agent and later a job at the CIA. It was a staggeringly ironic lambast of US federal agencies, as he himself managed to subvert the entire vetting process as well.

Simmons: Somewhere along the line of course Douglas, someone, whoever was responsible for the background check at the FBI really, really fell down.

Douglas Kennedy, Big Story Correspondent: Simmons says a background check should also have uncovered Prouty's association with Talal Shaheen, one of the top fundraisers for the anti-Israel terror group Hezbollah. Shaheen married Prouty's sister Elfat El Aouar in 2000 and is said to have laundered millions of dollars from this Detroit restaurant to the Iran backed group in Lebanon. That same year, prosecutors say Prouty penetrated the FBI's computerized case system looking for information about her sister, Shaheen and herself, all while passing FBI administered polygraph tests.

Simmons: That's very alarming that she would have number one the capability to do it or that we had very, very poor quality people running the test … This has exposed the raw nerve, if you will, of a flaw in the background check, and without a background check, without knowing who we're hiring, and who we are employing to protect our nation, we are in big, big trouble.

As a recurring Fox News contributor who also worked on behalf of the conservative watchdog group Accuracy in Media, Simmons used his imaginary status to spread inaccuracies. When Democratic House Speaker Nancy Pelosi accused the CIA of lying in 2009 when they claimed that in a 2002 briefing with future CIA Director Porter Goss, Pelosi was briefed about torture techniques when she emphatically claimed she had not been, Fox News brought Simmons on to accuse her on behalf of the intelligence community of being a pathological liar and jeopardizing national security. Simmons also claimed later in the interview that the Church Commission in the 1970s led to 9/11 in 2001.

Simmons later went on to join the Citizens Commission on Benghazi (CCB), a group underwritten by Accuracy in Media.  Members of the CCB include former Congressman Peter Hoekstra, now along with Goss, as senior advisor of law firm Dickstein Shapiro LLC, and advisory board of Newsmax; Accuracy in Media’s own Editor Roger Aronoff; disgraced former congressman Allen West, and others.

According to Simmons' website, he claims that in 2004 Secretary Rumsfeld hired him as part of the Pentagon Outreach Program for Military and Intelligence Analysts.

Simmons was also a member of the Intelligence Summit advisory council, along with notorious Muslim smearer Robert Spencer of Jihadwatch. Earlier this year, Simmons went on Neil Cavuto's Fox News show and published in conjunction with the Clarion Project a Tea Party newsletter that said that there were "19 Muslim paramilitary camps in the United States."

Simmons is due to be arraigned Thursday at the Eastern District of Virginia Federal Courthouse in Alexandria.