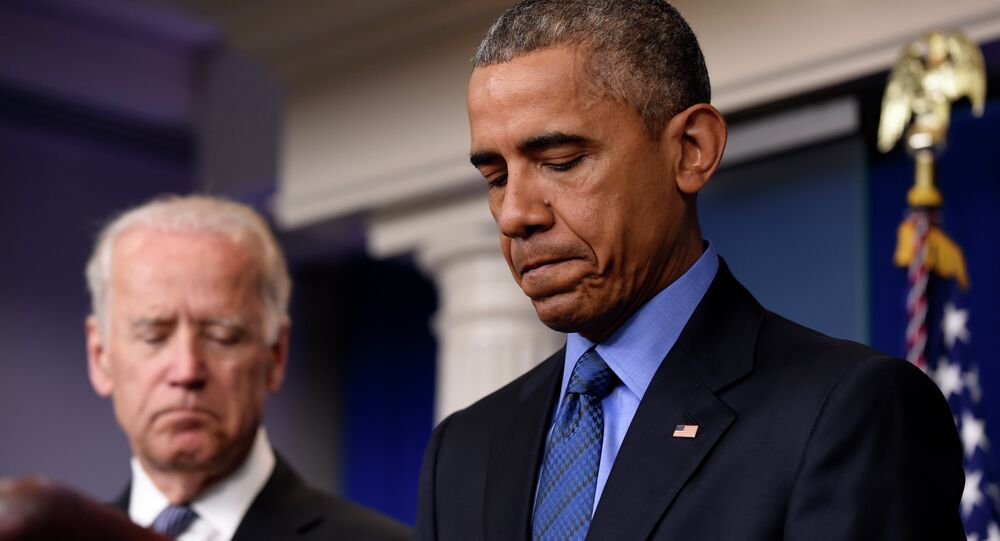 US President Barack Obama is going through some real tough times both on the home front and on the international level with a series of foreign policy failures, the journal Strategic Culture Foundation reported.

Obama failed to show leadership and deal with a series of major issues in the United States, including rampant gun-related violence, widespread racism among law-enforcement officials and growing inequality between the richest and poorest Americans, among other things.

"He reacts, rather than acts. He talks a great talk, rather than leading with action and delivering results," the journal wrote, adding that Obama and Vice President Joe Biden spent nearly two presidential terms "talking" on a variety of major issues, but when it came to stepping up and acting on their words, Obama and Biden did nothing.

At the same time, on the international level, Obama kept being constantly outsmarted by Russian President Vladimir Putin, especially when it came to US Middle Eastern policies, the source said.

© AP Photo / Marko Drobnjakovic
Obama’s Failed ‘Non-Strategy’ in MidEast Has Fallen Into Ruins
The situation in Syria would have been very different if the Obama administration listened to Russia during a UN Security Council meeting in 2011 at the beginning of the Syrian conflict and partnered with Russia, instead of seeking to arm various factions of Syrian militants in an attempt to overthrow the government of Bashar al-Assad.

The United States spent nearly $500 million to train and equip Syrian militants. The half million dollar program was intended to train over 5,000 rebels; however, in the end the program managed to train only about 100 fighters, out of which most were killed, deserted or worst of all joined the al-Nusra terrorist group. Currently, there are less than ten US-trained rebels fighting against ISIL in Syria, according to a top US general.

The US-led international airstrike campaign on ISIL targets in Syria has been a failure as well. For over a year the coalition has been bombing ISIL in Syria and Iraq, but the end result was that the terrorist organization managed to increase territories under its control amid the airstrikes.

"Obama's policy has been all over the place on Syria and a total mess," the journal said, pointing out his inconsistent and illogical policies in Syria.

The whole world now knows that Obama is a man, who is naïve and can't be taken seriously. His words mean little, as he lacks the backbone to follow through on his promises, the Strategic Culture Foundation said.

To top it all off, Obama, who is the 2009 Nobel Peace Prize Winner, has been under heavy criticism for the hospital bombing in Kunduz, Afghanistan that killed 22 people, including 12 MSF staff members.

So next time, instead of shattering the air with empty words, Obama should take a lesson or two from Putin on how to be a good leader, the journal suggested.