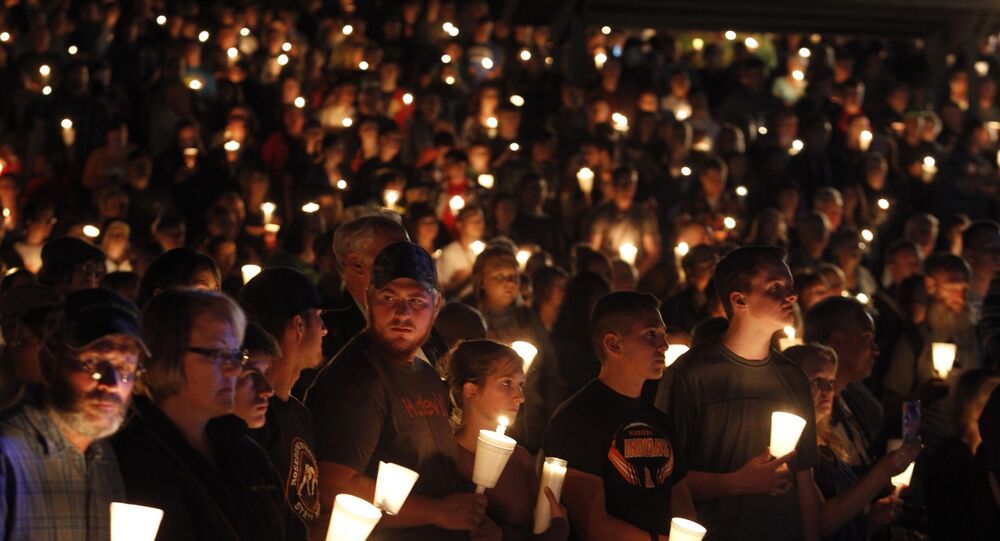 Ian Mercer, the father of the Oregon shooter who killed nine people at Umpqua Community College last Thursday, roundly rebuked weak gun laws in the US while urging legislators to change them in an interview with CNN on Saturday.

© AFP 2021 / Cengiz Yar Jr.
Oregon Gunman Asked Students About Their Religion Before Killing Them
Mercer believes that gun laws in the US are the main reason behind mass killings, which US President Obama has recently called a 'tragic routine'. "Even people that believe in the right to bear arms, what right do you have to take people’s lives? That’s what guns are, the killers," Mercer told journalists. He voiced his belief that a lack of gun regulations had resulted in the Oregon massacre, committed by his son, who had easy access to weapons, just like other mass killers.

"We talk about gun laws. We talk about gun control. Every time something like this happens, they talk about it and nothing gets done. I’m not trying to say that that’s to blame for what happened, but if Chris had not been able to get hold of 13 guns, this wouldn’t have happened," Mercer added.

The US ranks the first among countries where mass shootings have been committed by people who obtain guns legally. Despite the use of legally-obtained firearms mass shootings, gun advocates and many members of Congress have stress that mental illness has been the main cause of each massacre.

Vermont Senator Bernie Sanders, a strong contender for the Democratic Party's presidential nomination, believes that no legislation could have prevented the deadly shootings; this may be influenced by the fact that he represents a state where many residents are recreational hunters.

Another presidential frontrunner, Donald Trump, has echoed Sanders, saying "no matter what you do – guns, no guns – it doesn’t matter. You have people that are mentally ill, and they’re going to come through the cracks. And they’re going to do things that people will not even believe are possible."

© REUTERS / Steve Dipaola
Mass Shootings Became Tragic Routine in US - Obama on Oregon Murders
Republicans blame mental illness for the high number of massacres which have been committed by people who have legally obtained their firearms. According to a February 2015 article Jonathan M. Metzl, PhD and Kenneth T. MacLeish, PhD penned for the American Journal of Public Health, "Reports suggest that up to 60% of perpetrators of mass shootings in the United States since 1970 displayed symptoms including acute paranoia, delusions, and depression before committing their crimes."

However, drawing the attention away from mass murders and focusing on endemic gun violence in America, they pointed out that "databases that track gun homicides, such as the National Center for Health Statistics…show that fewer than 5% of the 120,000 gun-related killings in the United States between 2001 and 2010 were perpetrated by people diagnosed with mental illness." The authors go on to underscore that less attention is paid many gun crimes that don't fall into the 'massacre' category as they are more likely to affect socially disadvantaged groups.

Since Oregon police launched their investigation into Thursday's tragic events, their concern that he was mentally ill has been raised by many people. The killer allegedly had a history of mental illness, but it’s still unclear whether courts will determine that this was a factor or what effect it will ultimately have on gun legislation.

The slaughter at Umpqua Community College in Roseburg, Oregon, in which 10 people died and 9 were wounded, marked the 45th school shooting to occur in the US so far this year.