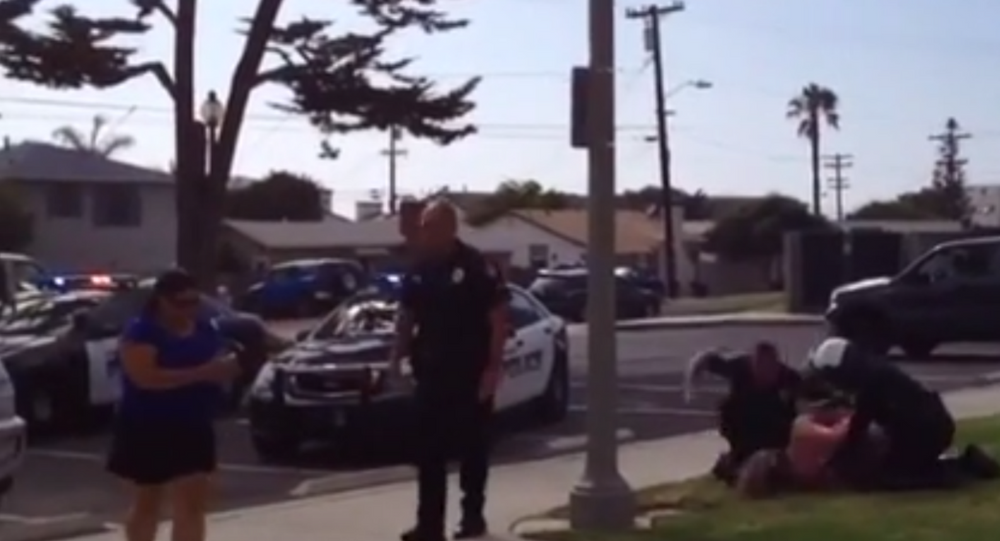 A California mother of two is suing the city of Carlsbad for federal civil rights violations, after she was brutally beaten by a police officer as another held her down, all in front of her two small children.

The 2013 incident was captured on camera by a witness: Cindy Hahn, 40, screamed for help as an officer punched her in the face with a closed fist.

© Flickr / Tony Webster
Ohio Cop Who Killed Man With Cruiser Refused to Perform CPR, Checked on His Car Instead

The incident began as Hahn was leaving a birthday party with her children, ages 7 and 11.  As she was leaving, she saw officers surrounding a vehicle with a car alarm blaring.

Innocently enough, she asked one of the officers, Officer Kenyatte Valentine, why they didn’t stop the alarm.

Valentine became irritated with Hahn, who is also the daughter of a retired police officer, and told her to “mind her own f*cking business,” the complaint states.

Shocked by his aggressive response, Hahn called the police department’s non-emergency number and reported him.

Moments later, as she was pulling her own car out, Valentine pulled her over for an alleged seatbelt violation.  Joined by another officer, they yanked her out of the vehicle and pinned her to the ground.

Valentine then began hitting her repeatedly with closed fists as she cried out for help and her children screamed inside the vehicle.

A witness tried to step in and intervene, but was blocked by a third officer.

Hahn was then charged with resisting arrest and felony battery on an officer, but those charges were dropped this July, two years later, when the district attorney saw the witnesses video.

The City of Carlsbad released a statement saying they look forward to their day in court.

“The City of Carlsbad looks forward to bringing this lawsuit before the proper judicial authorities as soon as possible. We are prepared to provide a complete and detailed account of the facts of this incident in a courtroom, not in the media.”