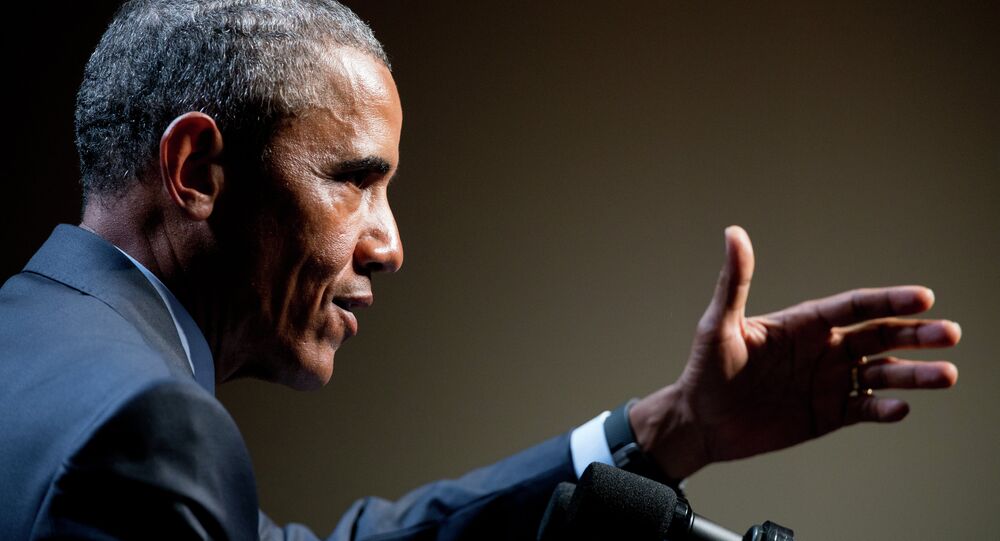 In his comments reacting to Thursday’s college campus shooting massacre in Oregon - the 15th time he’s had to address the nation following a mass shooting this year alone - US President Barack Obama asked the country’s media to publish statistics comparing US death tolls from terrorism and gun violence.

© AP Photo / Joe Burbank
George Zimmerman Compares ‘Piece of Sh*t’ Obama to Oregon Shooter
The slaughter at Umpqua Community College in Roseburg, Oregon, in which 10 people died and 9 were wounded, marked the 45th school shooting in the US so far this year.

These disturbing numbers should infuriate the nation, the president stated. Instead, as many across the US lamented on Friday, shootings in schools and other public spaces have become a tragic routine, to which the American public has become more and more numb.

At a Thursday press briefing, White House Press Secretary Josh Earnest emphasized that gun control is a priority for the Obama administration.

"As I said just a few months ago, and I said a few months before that, and I said each time we see one of these mass shootings, our thoughts and prayers are not enough," Obama said in his speech Thursday afternoon.

With Republicans running both the Senate and the House of Representatives, congressional leaders have shown no willingness to make efforts to curb the proliferation of firearms in the US, despite the staggering increase in the number of mass shootings. The gun lobby, comprised of the National Rifle Association and gun manufacturers, also exerts strong control over lawmakers.

"This is a political choice that we make to allow this to happen every few months in America. We collectively are answerable to those families who lose their loved ones because of our inaction."

In an attempt to prove his point, Obama asked news organizations to compare death tolls from terror attacks to deaths from gun violence in the US:

"We spend over a trillion dollars, and pass countless laws, and devote entire agencies to preventing terrorist attacks on our soil, and rightfully so. And yet, we have a Congress that explicitly blocks us from even collecting data on how we could potentially reduce gun deaths."

Obama challenged the media to compare gun and terrorism deaths. So I did. http://t.co/0JZkoeLKTo pic.twitter.com/C9xj7QH5jV

© AP Photo / Greg Allen
Oregon Campus Massacre: Trump Shrugs, Says ‘What Are You Gonna Do?’ (VIDEO)
In fact, the number of gun-violence deaths in the first ten months of 2015 equate to nearly three 9/11s. Between the three plane crashes on September 11, 2001 in New York, Washington, DC and rural Pennsylvania, 2,996 people lost their lives, a figure thrown into striking perspective when compared to the 8,512 deaths stemming from gun violence this year.

Though the diagrams are striking enough, some still question Obama's prioritization of gun control.

The Washington Post's Phillip Bump noted that people die from myriad other causes in the US each year, be it car crashes (32,719 deaths in 2013) or cancer (more than 550,000 deaths so far this year).

"So Obama's factual point is accurate," Bump said. "His political one — assuming we're understanding it correctly — is iffier."

The difference, of course, is that the car crash lobby doesn't own any Washington politicians, to our knowledge.