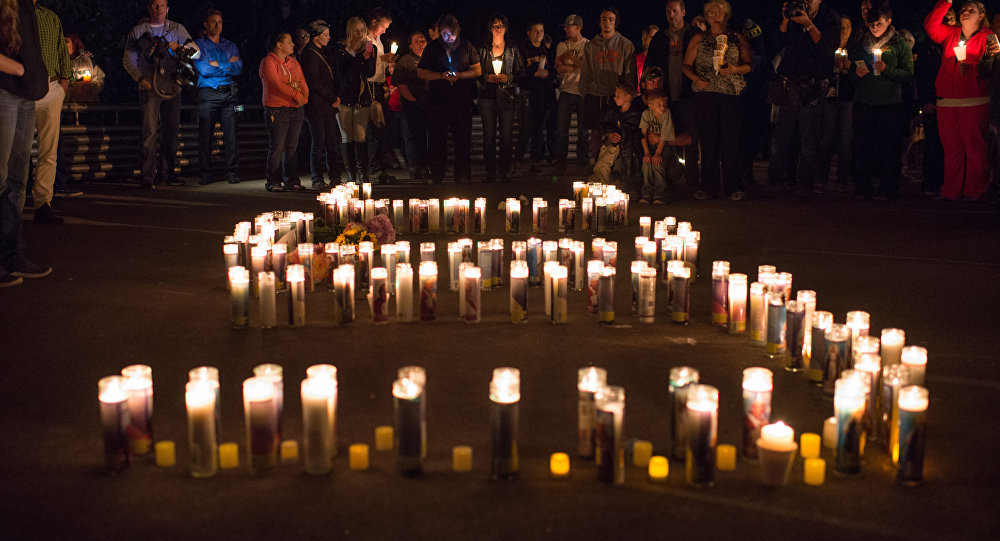 A lone gunman opened fire at a community college in the northwestern US state of Oregon on Thursday morning, killing at least nine and injuring seven others before being shot dead by police.

© REUTERS / Steve Dipaola
Mass Shootings Became Tragic Routine in US - Obama on Oregon Murders
The massacre at Umpqua Community College began when the assailant, armed with three handguns and an assault rifle, stormed inside and started firing, The Los Angeles Times reported on Friday.

The gunman was identified by local police as Chris Harper-Mercer, 26, a resident of Oregon.

According to a student at Umpqua, Mercer demanded to know his victims’ religion before killing them.

"And they would stand up and he said, 'Good, because you're a Christian, you're going to see God in just about one second,'" the father of Anastasia Boylan, who was wounded by Harper Mercer, said, as quoted by CNN.

Anastasia Boylan, 18, was in her classroom when the gunman entered and shot her professor.

"They just laid on the ground and pretended they were dead," Janet Willis, the grandmother of Boylan said.

The gunmen forced other in classroom to rise and state their religion.

"If they said they were Christians, they were shot again," Willis added.

An online dating profile, linked to Harper-Mercer’s email address, identified his views as “conservative, Republican” and listed “organized religion” as one of his “dislikes.”

“This is a political choice that we make — to allow this to happen every few months in America. We collectively are answerable to those families who lose their loved ones because of our inaction,” the President said.

The attack was among the worst mass school shootings over the last two decades, including the one at Columbine High School in Colorado in 1999, which left 13 people dead; the Sandy Hook Elementary School shooting in Connecticut in 2012, which claimed 26 lives; and the rampage at Virginia Tech in 2007, in which 32 people lost their lives.