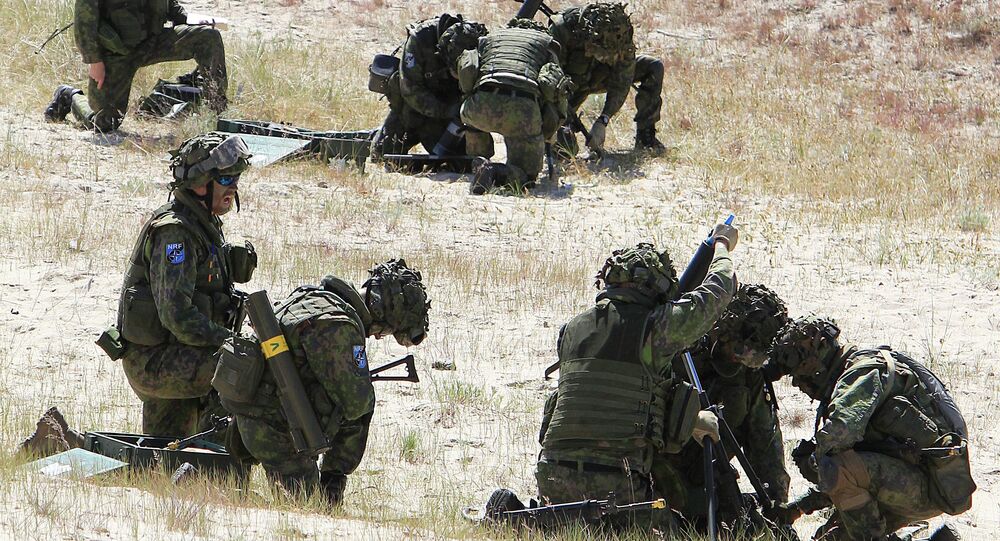 The US is preparing for a possible conflict with Russia in the Baltic States. The Pentagon has worked out various plans and performed numerous war games in order to be able to respond to an alleged Russian aggression, Deutsche Wirtschafts Nachrichten wrote.

For the first time since the end of the Cold War, the Pentagon has revised its response plans in case of a military conflict with Russia, paying special attention to Russia’s direct neighbors in the Baltic region, the newspaper reported.

PAUL NADOLSKI/US ARMY
NATO Unable to Defend Baltics Due to Mooses, Vast Swamplands
The new US defense plan is focused on so-called hybrid warfare. It uses irregular troops, targeted destabilization of the region by organizing mass protests and the use of cyber attacks on critical infrastructure.

As a pretext for its military activation, the US again has used the alleged Russian involvement in Ukraine.

"Russia's invasion of Eastern Ukraine urged the US to dust off its emergency plans. They were pretty outdated," US expert Michèle Flournoy said, cited by DWN.

Since the outbreak of the Ukrainian crisis, NATO has carried out numerous war games in the Baltic States, to prepare its forces for a potential situation, when Russia would occupy the territories of its Baltic neighbors. However, the newspaper suggests that the war games rather serve to justify high military spending in the eastern NATO countries as well as an increased presence of US troops in Europe.

© Sputnik / Igor Chuprin
Russian Troops Land on Baltic Sea Coast
The US has already announced plans to deploy additional tanks and artillery in the Baltic States, as CNN reported. Since the outbreak of the Ukrainian crisis NATO has transported large amounts of heavy military equipment to the East.

So far, the Pentagon plans for the Baltic states are only war games. Yet they are designed to send a clear signal to Russia. US military strategist David Ochmanek is confident that NATO would be able to contain Russia if a military conflict in the Baltics would break out.

"I have no doubt that eventually NATO will prevail and recover the territorial integrity of all NATO countries. But I cannot guarantee that it will be easy or without a great risk," Ochmanek said.