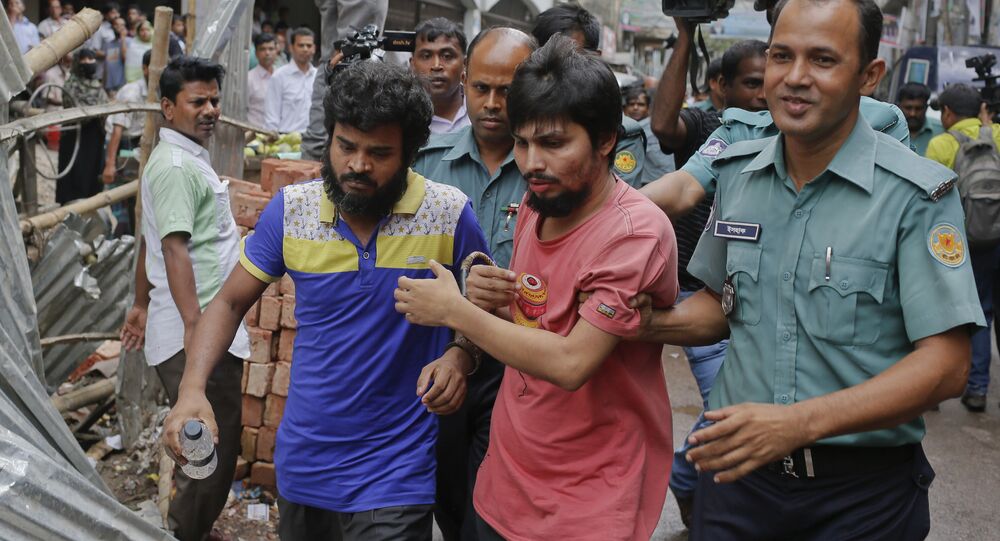 Ansarullah Bangla Team (ABT), an extremist group in Bangladesh, has published online a hit list of writers, bloggers, and activists around the world, threatening to kill them if the terror group’s demands are not met.

© Sputnik / Pakhomov
Pakistan Arrests Five Suspected Al-Qaeda Members in Karachi
The list was purportedly released as part of an official statement by the ABT, a group that has been charged with murdering bloggers in Bangladesh. ABT is believed to be close to the Ansar ul-Islam organization, which is a South Asian Al-Qaeda affiliate.

The statement features a logo with a black flag carrying the seal of the Prophet Muhammed, commonly used by terrorist organizations around the world. Names of bloggers and writers from around the world, including nine in the United Kingdom, seven in Germany, two in the United States, one in Canada, and one in Sweden, are listed, along with the following demand:

"Cancel the Bangladesh citizenship of enemies of Islam and [Muslim religious] education, atheists, apostates, unbelievers, anti-Islamic bloggers, agents of India…otherwise they will be killed wherever they can be found in the Almighty’s world."

ABT has been involved in the brutal deaths of bloggers in Bangladesh in recent months, but the statement is the first indication the group has made in targeting individuals abroad. The list will therefore likely raise concerns among authorities in the United States and Europe that the Islamist militant group could expand its activities to an international level.

Since February, four bloggers have been killed by Islamic militants in Bangladesh, prompting worldwide shock and anger. US-born citizen Avijit Roy, a science writer, was killed with machetes and knives in Dhaka, Bangladesh’s capital city. One month later, 27-year-old blogger Washiqur Rahman was similarly killed by attackers with meat cleavers outside his home, and Bangladeshi authorities have charged an ABT leader and four other supporters with the crime. Two other bloggers, Ananta Biyoy Das and Niloy Neel, were hacked to death in May, within one week of each other.

Many have also criticized the Bangladeshi government for asking bloggers and journalists to avoid writing on provocative issues instead of providing them with the necessary protection.

"It’s shocking that Bangladesh authorities not only failed to protect bloggers despite complaints to the police about threats against them, but instead are proposing self-censorship," Human Rights Watch said in a statement last month.

Meanwhile, bloggers whose names have appeared on the list told the Guardian that they intend to keep writing.

"Our weapon is [the] pen and we can use it without hurting anybody. We just want to make people conscious about their rights. So that nobody can use them to fulfill bad intentions," Ananya Azad, a Bangladeshi blogger who was exiled to Europe said.

While Bangladesh is officially a secular country, around 90% of its 160 million people are Muslim. The country became independent from Pakistan in 1971, after a brutal civil war. A recent surge of extremism in the country has reignited tensions between conservatives and liberals that have long been simmering since its independence.