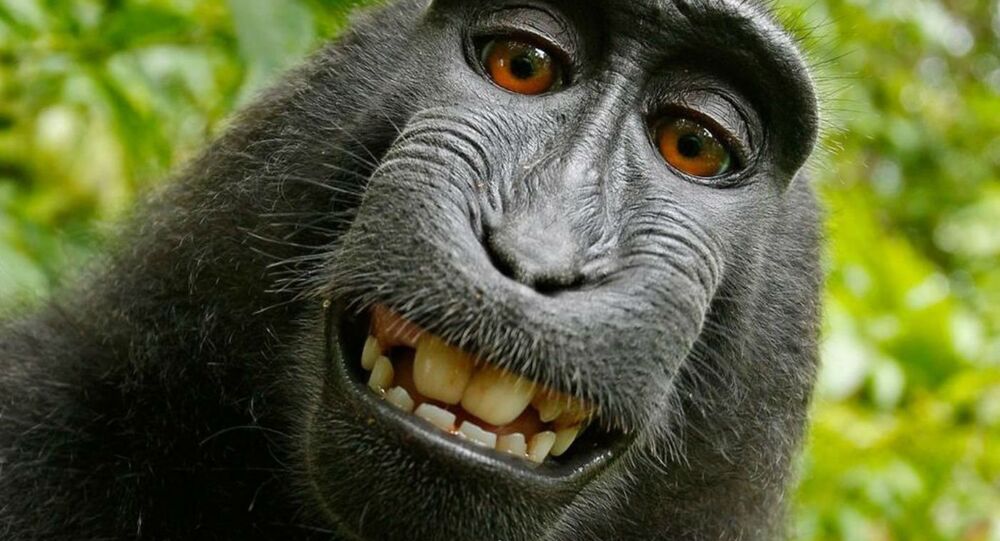 Controversial animal rights group PETA has filed a lawsuit on behalf of a macaque monkey who took a series of famous selfies, arguing he should receive the money the nature photographer earned for positioning the camera. The group has offered to receive the funds on behalf of the macaque.

The lawsuit filed on Tuesday in a federal court in San Francisco seeks for the organization People for the Ethical Treatment of Animals (PETA) to receive the proceeds from the photo on behalf of the monkey — a six-year-old macaque named Naruto who lives in a reserve on the island of Sulawesi in Indonesia.

The photos were published in a book titled “Wildlife Personalities” by British nature photographer David Slater, who had set up the shots during a 2011 trip to the reserve.  Since then, the shots have been widely used and distributed by outlets who claim that since the photos were taken by the animal, Slater does not own the copyright.

US Copyright law specifies that works produced by animals do not qualify for registered copyrights, but PETA is aiming to challenge that.

“The act grants copyright to authors of original works, with no limit on species,” Jeffrey Kerr, a lawyer with PETA told the Guardian. “Copyright law is clear: it’s not the person who owns the camera, it’s the being who took the photograph.”

The lawsuit asserts that the monkey authored the photographs by manipulating the camera by his own autonomous actions, and therefore he owns the photos.  But, as money is of no use to monkeys, PETA has offered to collect any proceeds made from the use of the photos on Naruto’s behalf.

© Flickr / Jon Hathaway
PETA Kills 88% of Animals Entrusted to its Care
Last year, Slater offered copies of the photos for the cost of shipping and handling, and donated $1.70 from each one to a conservation project, despite defending his right to make money off the photos.  This wasn’t enough for PETA, however, who argue that they should be entitled to the money on behalf of the monkey.

“I sincerely wish my five-year-old daughter to be able to be proud of her father and inherit my copyrights so that she can make my work into an asset and inheritance and go to university,” Slater wrote in an email to The Guardian. “I have very little else to offer her.”

Slater told The Guardian that he is “very saddened” by PETA’s decision to attack him, as he considers himself to be an animal rights advocate.

Alcoholic chimpanzee to be taken to treatment clinic from Russian zoo