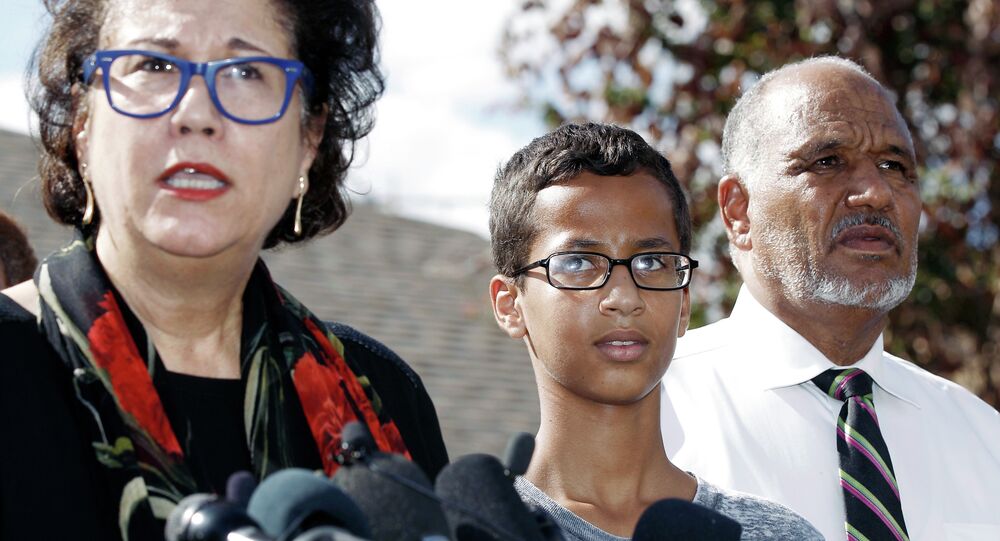 Ahmed Mohamed, the 9th grader from Irving, Texas who shot to stardom after being arrested for bringing his homemade clock to school, is headed to New York for a meeting with foreign dignitaries at the United Nations this week, according to a family friend.

© AP Photo / LM Otero
Texas Police Chief Admits Cops Knew Ahmed Mohamed’s Clock Wouldn’t Blow Up
US media has been buzzing this week with the story of Mohamed, the muslim student who was arrested after the clock he made and brought to school was taken to be a "hoax" bomb, in an incident that's prompted public outrage over institutionalized islamophobia in the US.

Mohamed made an appearance at the Google Science Fair event at tech giant's Mountain View campus on Monday, and he's been invited to the White House by President Barack Obama for an astronomy night. Facebook Chief Executive Mark Zuckerberg's also voiced his support for the young man, saying "having the skill and ambition to build something cool should lead to applause, not arrest."

Cool clock, Ahmed. Want to bring it to the White House? We should inspire more kids like you to like science. It's what makes America great.

Fourteen-year-old Mohamed and his family are expected at UN Headquarters in New York on Wednesday, though no details about the planned meeting were immediately available.  His social schedule has become quite draining, the boy's father Mohamed Elhassan Mohamed told the Dallas Morning News, adding that he hasn't been eating or sleeping well.  He also said his son would be withdrawing from MacArthur High School's district, as he no longer feels comfortable there after the incident.

I can't wait to get my clock back & take it to the #WhiteHouse to show @BarackObama the invite is an honor, looking forward to meeting you!

Mohamed, who enjoys dabbling in robotics, was handcuffed and questioned about the clock he brought to school to impress his friends and teachers. He was then suspended from school for three days prior to his withdrawal from the district, though all charges against him were dropped and police said they'd investigate the decisions officers made in his arrest, Reuters reported.

For those that are asking, here is a picture of my clock. This is from the police, I will take another pic when I can pic.twitter.com/iIu6n2xbp4