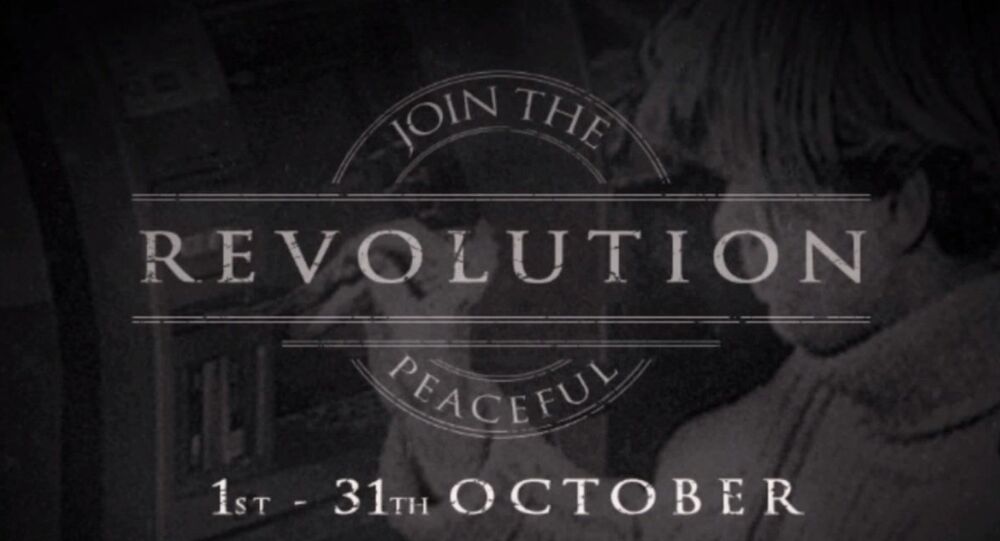 Right on the heels of the Occupy Wall Street movement’s four year anniversary, activist group Anonymous has launched a new campaign which they say outlines an “easy” way for the 99% to demonstrate their strength and overcome the richest 1%.

© AFP 2019 / Stan HONDA
Occupy Wall Street Activists Gather in NYC to Mark Movement's 4th Year
The statement was released on Anonymous’ website, with a video inviting people to join the peaceful revolution, under the name "Black October." The group calls on "ordinary people" to demonstrate their strength and independence from wealthy banks by simply using cash instead of debit and credit cards.

"US branches of Germany’s Deutsche Bank and Spain’s Banco Santander have failed US Fed stress tests, while America’s largest bank, Bank of America, is put on 'warning,'" the statement reads. "How far can the ordinary people shoulder responsibility of a failed private bank?"

A stress test, officially known as the Comprehensive Capital and Analysis Review, is an annual assessment conducted by the US Federal Reserve of a bank’s ability to “lend to households and businesses even in times of stress.” It was introduced in the wake of the 2008 financial crisis.

This year’s review found that both Deutsche Bank and Banco Santander would fail to deal with "doomsday" scenarios such as rising unemployment and plummeting house prices, while Bank of America also has "certain weaknesses."

With "Black October," Anonymous asks people to demonstrate their independence from such big banks.

The month-long campaign is outlined in Anonymous’ video and statement, inviting people to take their money out of bank accounts and not to use their debit or credit cards.

Driven by social and economic inequality, the Occupy movement began on September 17, 2011 in Zuccotti Park in New York’s Wall Street financial district. The movement was inspired by anti-austerity protests in Spain, and saw thousands of activists in hundreds of US cities coming together and calling for policy reforms favoring 99% of Americans over the richest and most powerful 1%.