We Were Left in the Dark About Deadly Wildfire, Californians Complain

Residents in the path of a deadly wildfire that raged across California last week complained that they were not given a notice by authorities to evacuate the area.

© AP Photo / Elaine Thompson
Russia Offers to Help US Suppress California Wildfires
Californian residents threatened by a wildfire that broke out last weekend have complained that they received no notification from authorities that the blaze was closing in on their communities, and that they should evacuate to safety.

The 'Valley Fire,' one of the most destructive to ravage California in recent years, broke out on September 12 and has caused carnage across more than 73,000 acres of Lake, Napa and Sonoma Counties in the north of the state.

By The Numbers — Check out the latest stats on the #ValleyFire. pic.twitter.com/5DZ0GXU0Yf

Official figures updated on Friday by Calfire, the California Department of Forestry and Fire Protection, stated that so far the fire has destroyed 585 homes and hundreds of other structures, and that more than 7,000 residential and 145 commercial structures remain threatened by the fire.

According to reports, two people died in the fire after refusing orders to evacuate, and two others died in a separate fire in Lake Country after rejecting warnings from friends and family to flee for safety, though it is unknown whether they received an official notice to evacuate. 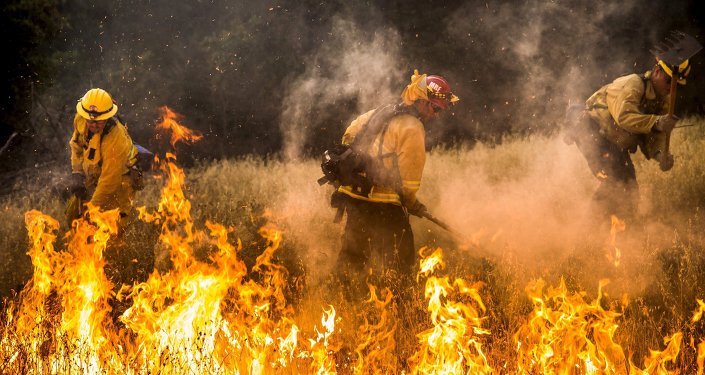 © AP Photo / Max Whittaker
California Butte Mountain Fire Leaves 1 Dead, Forces 10,000 to Evacuate
Some of the residents who managed to leave their homes and reach safety complained on Friday that they did not receive evacuation notices, which they expected to reach them via a recorded telephone message, or an official with a loudspeaker traveling through the area, calling for people to leave.

"None of that happened," said one resident of Lake County, where the fire originated around 1:30pm on Saturday. Earlier this week Calfire stated that evacuation assistance was requested on Saturday at 1:50 pm, but did not say which communities were given the order, or when.

In response to the complaints, a spokesperson for Calfire said that the authorities relied on residents themselves to recognize the danger.

"You may get that notice, or you may not, depending on how fast that fire is moving. If you can see the fire, you need to be going,” recommended Lynnette Round, of the fire service.

The #ValleyFire is raging near Napa. This driver shot dramatic footage as he escaped Anderson Springs. http://t.co/8KRJbu35PC via @youtube

According to the fire service, about 15,400 people are currently under evacuation as a result of the blaze, one of a series of fires this year to strike the state, which is currently suffering its worst drought in over a century.

Driving Through the California Forest Fire