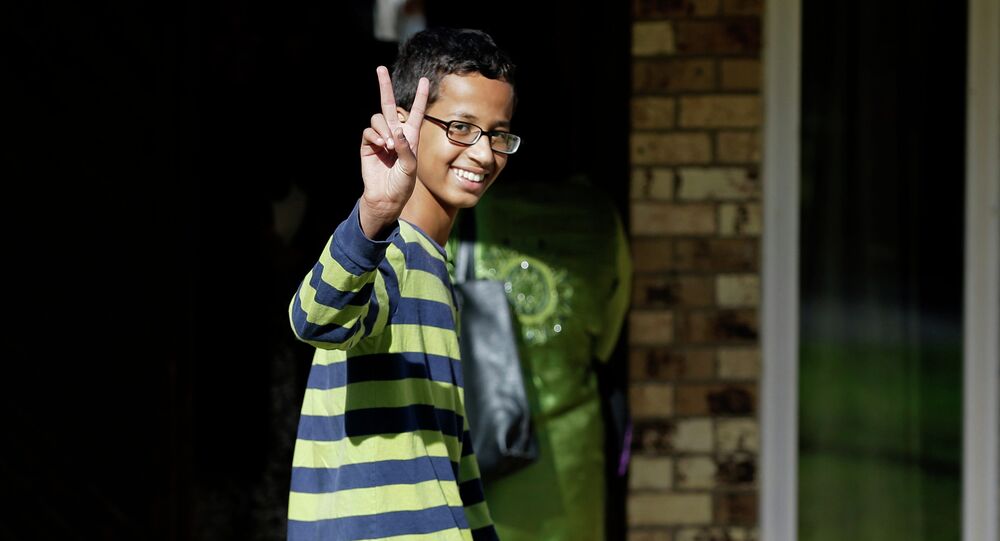 Irving Police Chief Larry Boyd avoided saying Thursday that officers improperly arrested 14-year-old student Ahmed Mohamed, even though they knew that the homemade clock device he brought to school was not an explosive.

"I think it's hard for folks watching this from the outside, seeing this all link up, seeing this kid – who seems like a tremendously poised, bright genuine kid – be put through this. To not hear anyone in officaldom down there that 'Yeah, we didn't get this one right,'" Hayes told Chief Boyd.

"Officers made the decision they did with the information they had with what they thought was right at the time," responded Boyd. "We are clearly going to review this. We want to always look at ways we can enhance and have a better outcome. There's a lot of decision points, there's a lot of alternatives that they have available to them."

Ahmed Mohamed was marched out of MacArthur High School shackled in handcuffs on Monday after being accused of making a "hoax bomb" to deliberately cause a panic at school, despite the fact that Mohamed clearly told students and teachers repeatedly that what he made was a clock attached to a motherboard, and did not present the device as a bomb.

Beth Van Duyne, the Irving mayor and notoriously prolific anti-Muslim activist, first defended the arrest and handling of the incident before backtracking to say that they may have erred. She refused to issue a formal apology to Mohamed or his family, however.

“The first concern for the Irving Independent School District and the Irving Police Department is always the safety of our children and Irving citizens. We are proud to have one of the safest cities in the country and that is due in large part to the diligence and professionalism of our police department. We are also proud that Irving ISD is nationally recognized by the National School Board Association and the Center for Digital Education for the school district’s use of innovative technologies, STEM curriculum, and other practices that help our students excel in an advanced learning environment.

I do not fault the school or the police for looking into what they saw as a potential threat. The have procedures to run when a possible threat or criminal act is discovered. They follow these procedures in the sole interest of protecting our children and school personnel. To the best of my knowledge, they followed protocol for investigating whether this was an attempt to bring a Hoax Bomb to a school campus. Following this investigation, Irving PD has stated no charges will be filed against (Ahmed Mohamed). I hope this incident does not serve as a deterrent against our police and school personnel from maintaining the safety and security of our schools."

Mayor Van Duyne later edited this statement to add another paragraph explaining that she understood why Mohamed's family would be upset, but stopped short of a formal apology on behalf of the city, police department or the school:

"As a parent, I agree that if this happened to my child I would be very upset. It is my sincere desire that Irving ISD students are encouraged to use their creativity, develop innovations and explore their interests in a manner that fosters higher learning. Hopefully, we can all learn from this student who has obvious gifts, will not feel at all discouraged from pursuing his talent in electronics and engineering."

Later that evening, in response to the controversy, Barack Obama tweeted an invitation for Mohamed to come to the White House, which as of Friday had been retweeted by over half a million Twitter users.

Students at Massachusetts Institute of Technology, which Mohamed told reporters he wanted to attend someday, had an all-night hackathon to build a solidarity clock for the student.

Mohamed said in a press conference he intends to transfer high schools and perhaps even move out of Texas.