The Africanized honey bee is a hybrid created by crossbreeding in Brazil; the subspecies began its journey north when 26 bee swarms escaped from quarantine in 1957. 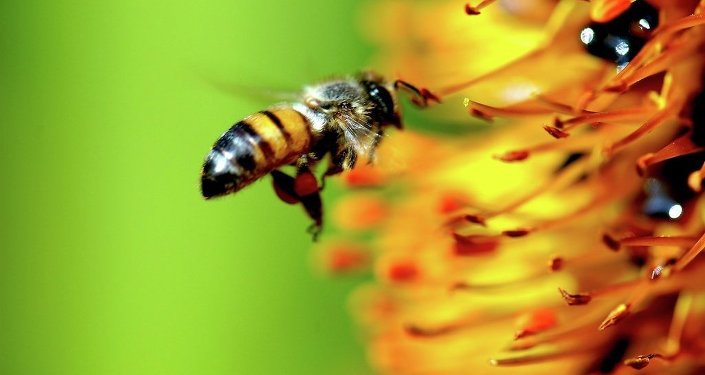 © Flickr / Danny Perez Photography
US Court Bans Bee-Killing Pesticide That's Wiped Out Millions of Insects
A strain of aggressive honeybee is continuing its expansion across California, and the foraging bees have made it as far as California's northern delta region, where the Sacramento and San Joaquin Rivers meet, according to a study from biologists at the University of San Diego.

Bees with Africanized genetic traits, which exhibit aggressive behavior and a tendency to swarm their victims, can be found just 40 kilometers south of Sacramento. Most of them belong to feral colonies rather than managed hives, say the researchers, who examined the genetic markers of 265 honey bees they collected at 91 sites throughout the state.

© Flickr / Marilyn Peddle
Buzzheimer's Disease? Animal Alzheimer's May be Killing Off World’s Bees
The venom of Africanized honey bees is no more toxic than their European relatives, but their propensity to attack has earned them their aggressive reputation. While a victim may receive 12 to 20 stings after disturbing a European bee colony, if an Africanized colony is disturbed, the killer bees could give the victim hundreds or even thousands of stings.

"The pattern of Africanization we documented in San Diego County and elsewhere in California appears consistent with patterns previously documented in Texas, where Africanized honey bees first appeared in the United States. After the initial wave of hybridization, the remaining bees have a mixture of African and European genes, with the majority of the genome from Africa," explained Joshua Kohn, a professor of biology at UC San Diego and lead author of the study.

The Africanized Honey Bee has been known to chase people for over a quarter of a mile at a time! pic.twitter.com/cIiT18PEiu

The bees were created in the 1950s by prominent Brazilian geneticist Warwick Kerr in the course of experiments to create a bee better suited for producing honey in the tropical South American climate than imported European honey bees.

On the request of the Brazilian Agriculture Ministry, in 1956 Kerr brought 63 live honey bee queens from a research trip to Africa, in order to crossbreed with the European bees. It was hoped that the new breed that would be more productive than the Europeans, but less angry than wild African honeybees.

In 1957, the first generation hybrid bees produced by the crossbreeding were being maintained in hive boxes, fitted with queen excluders to stop the queen leaving the hive and taking the swarm with her.

According to Kerr, the swarms were able to escape the defense when a passing local beekeeper removed the queen excluders, which allowed 26 Africanized honey bee queens with small swarms to escape into forest close to the town of Rio Claro.

From there, they began to move across South America, and reached Mexico in 1985. While the southern range of the bees has stabilized in Argentina, the bees have continued their march north; in 1990 the bees were in Texas, and in 1994 they reached southern California.