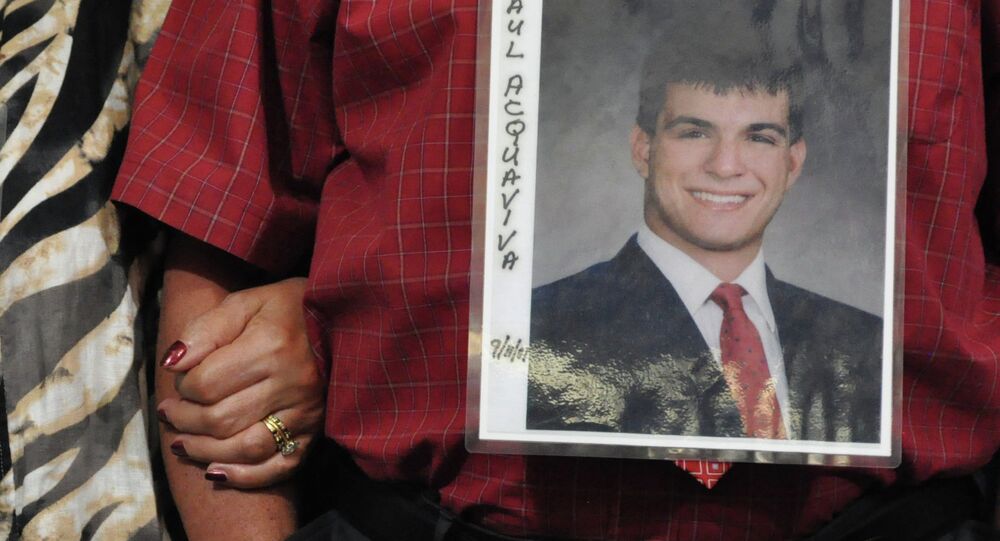 September 11 victim’s father said that wait for justice for Paul Acquaviva, killed in the September 11 terrorist attacks on the United States, has dragged on for 14 years.

© AP Photo / Gene Boyars
US Congress Too Busy to Uncover Secret 9/11 Chapter on Plot Financing
NEW YORK (Sputnik) – The wait for justice for Paul Acquaviva, killed in the September 11 terrorist attacks on the United States, has dragged on for 14 years, Paul’s father Tom Acquaviva told Sputnik on the sidelines of the September 11 Memorial in New York City on Friday.

"I would like to see justice for my son," Acquaviva said. "It was a terrible crime and they deserve to pay for it."

Paul, 29, was in the North Tower of the World Trade Center and died when the tower collapsed, he added.

Tom Acquaviva was one of several September 11 victims’ family members who traveled to Cuba to attend court proceedings at Guantanamo Bay for alleged terrorists that orchestrated the attacks.

"The trial never seems to end," Acquaviva said. "It’s continuous. Different motions, different technicalities. I was hoping in my lifetime to see a resolution."

On September 11, 2001, the Islamic terrorist group al-Qaeda launched a series of coordinated terrorist attacks against the United States. The terrorists hijacked four passenger planes; two of them were crashed into the North and South towers of the World Trade Center complex in New York City.

A third plane was flown into the Pentagon, while a fourth airliner was targeted at Washington, DC, but crashed into a field in Pennsylvania. Almost 3,000 people died in the attacks.

The United States responded to the September 11 attacks by launching a War on Terror, and invaded Afghanistan to depose the Taliban, which had harbored al-Qaeda.

On May 5, 2012, a US military court formally charged five men suspected of involvement in the September 11 attacks. They were charged with conspiracy, attack against civilians, intentional infliction of bodily harm, murder, violation of the laws of war, causing destruction, hijacking a plane and terrorism.

All five defendants pleaded not guilty and have yet to stand trial. Debate surrounding the location of the trial is still ongoing.