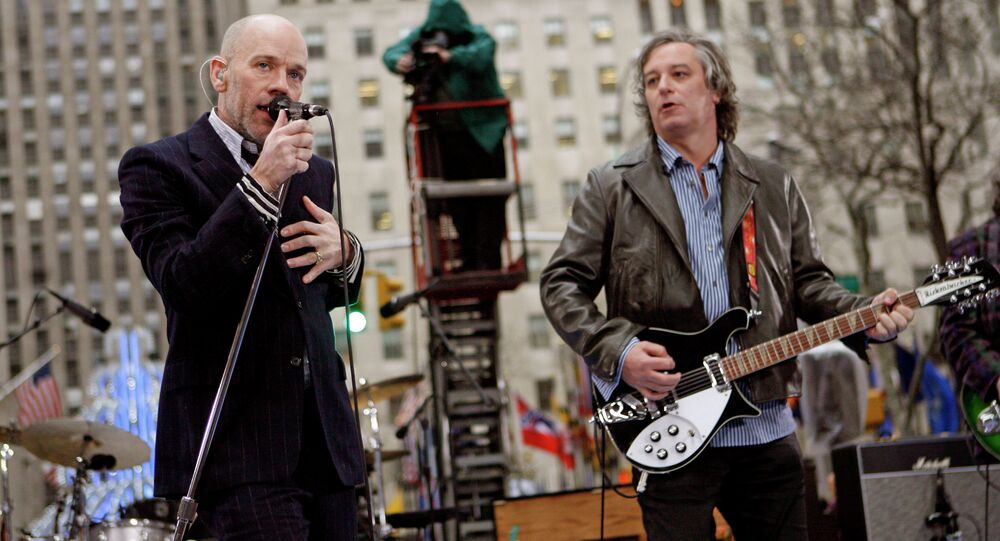 During a public appearance in Washington DC, Republican presidential hopeful Donald Trump took to the stage with "It’s the End of the World as We Know It (And I Feel Fine)." R.E.M. was none too pleased.

On Wednesday, the Tea Party organized a rally outside the US Capitol Building to protest the Iran nuclear deal. Texas Senator and Republican presidential candidate Ted Cruz was there, but the real star of the show – as he typically tends to be – was Donald Trump.

Both men went on to deride the nuclear agreement, calling US negotiators "very, very stupid people" and describing the deal as the "the single greatest national security threat facing America."

True to the general theme of doom and gloom, Trump was introduced to what organizers must have judged to be an appropriately alarmist song: "It’s the End of the World As We Know It," the 1987 hit by R.E.M.

"And I Feel Fine" aside, the song’s chorus epitomizes the Republican Party’s stance on almost any decision made by the Obama administration.

Which probably isn’t the message that the band intended. For one, the song can be more accurately read as an expression of the relief felt when one is separated from the noise of the everyday.  Perhaps more importantly, it’s about liberating oneself from anxieties imposed by others, be they from the media, religious institutions, or political groups.

Exaggerations about the dangers of the Iran nuclear deal are precisely the kind of political white noise that the song rebels against.

© AP Photo / Jacquelyn Martin
Rally attendees hold up names and phone numbers of legislators who are in support of the Iran deal.

Then there’s the fact that R.E.M. couldn’t be more politically different from the Tea Party. The LA Times described the band as America’s "most liberal and politically correct rock groups," with members Michael Stipe and Mike Mills being especially known for their activism.

Neither Stipe nor Mills were pleased with the use of their song during the Trump-Cruz rally.

"Go f**k yourselves, the lot of you – you sad, attention-grabbing, power-hungry little men," Stipe told the Daily Beast. "Do not use our music or my voice for your moronic charade of a campaign."

"Personally, I think the Orange Clown will do anything for attention," Mills said via Twitter, referring to Trump. "I hate giving it to him."

It’s a somewhat familiar story. A Republican candidate uses a song written by a musician with opposing political views, and that musician then expresses outrage. R.E.M. has been embroiled in a similar situation before, when Fox News used their “Losing My Religion” in 2012.

Trump also met pushback from Neil Young in July, when the candidate used “Rockin’ in the Free Word” to announce his candidacy. In the 1980s, outspoken Democrat Bruce Springsteen asked Ronald Reagan to stop campaigning with "Born in the USA." Even earlier this week, Survivor attacked Mike Huckabee and Kentucky clerk Kim Davis for celebrating her release from prison with their hit, "Eye of the Tiger."

Do these musicians have any ground to stand on? Legally speaking, not really. as the Atlantic points out, "as long as there’s a general license in place for music at rallies, convention centers, and the like, it’s almost certainly above board. Musicians can still object and make a stir, but it’s part of their licensing deal."

Still, it’s got to sting when politicians are summarily dismissed by artists they may admire. Just ask Republican Chris Christie, whose lifelong love for all things Springsteen has been well-documented, as has the fact that the Boss wants nothing to do with the New Jersey governor.

To save everyone trouble, maybe US politicians should just stick with "Stars and Stripes Forever."

Support for Donald Trump Surges Among US Republican Voters