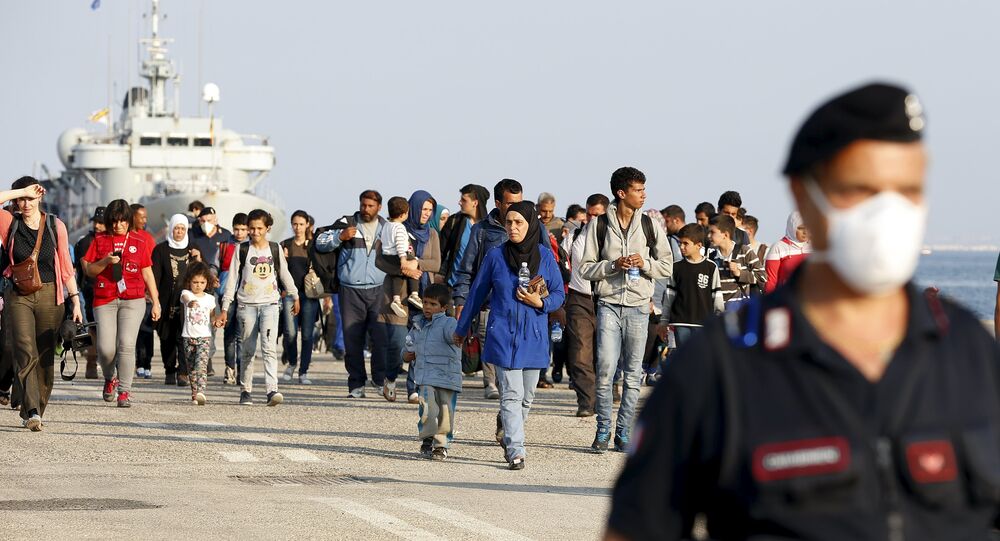 'It's a Genuine Tragedy,' But We Won't Take Syrian Refugees: US Spokesman

A White House spokesman said that although the humanitarian crisis caused by political instability in the Middle East is a "tragedy," the US has no plans to resettle more Syrian refugees.

© AP Photo / Uncredited
US Central Command Refuses to Probe Reports of 100s of Civilian Deaths in Syrian Airstrikes
The US will provide funds to the UN High Commissioner for Refugees and 'technical expertise' from its coastguard to European countries struggling to cope with the number of refugees who have arrived this year, but will not allow any more Syrians into the US, a White House spokesman said on Thursday.

When asked if the Obama administration had plans to increase the number of Syrian refugees in the US, which has given refuge to just 1,541 Syrians during the country's five years of civil war, White House spokesman Josh Earnest said, "I don't have any announcements along those lines."

The US "provides significant assistance through the UN High Commissioner for Refugees [UNHCR]," Earnest said in defense of the decision.

The spokesman praised the EU authorities for handling the mounting refugee crisis in Europe; figures from the EU border agency Frontex show that in July alone a record 107,500 migrants crossed into the European Union, most of them Syrians and Afghans.

"We commend the EU for the steps that they’ve already taken to begin cracking down on those who prey upon migrants in desperate situations.  We have seen widespread efforts of human trafficking, migrant smuggling, and we are certainly pleased to see the EU taking steps to crack down on that," Earnest said.

In this regard, the spokesman did offer some assistance to the country's European partners; the expertise of the US Coast Guard in dealing with migrants and refugees making dangerous sea crossings to reach their destination.

"There’s also some technical expertise that the United States can provide to our EU partners who are dealing with this difficult problem. The United States Coast Guard has some expertise in this regard and that is something that is being readily shared with our allies and partners in the EU."

© AP Photo
Officers of the Irish Navy ship Le Eithne rescue migrants in the Mediterranean Sea.
On August 28, the UNHCR stated that more than 300,000 refugees and migrants had used the dangerous sea route across the Mediterranean so far this year. More than 200,000 landed in Greece and an additional 110,000 in Italy.

Earnest's press briefing came the day after David Miliband, president of the International Rescue Committee [IRC], renewed its call on the US government to resettle 65,000 Syrian refugees before the end of 2016; the number represents half the 130,000 Syrian refugees the UNHCR called on the international community last year to resettle before the end of 2016.

"The country’s commitment to accept between 5,000 and 8,000 Syrian refugees before the end of 2016 can only be a first step. According to the IRC, the figure doesn’t come close to addressing the crisis in and around Syria," stated the IRC, which provides humanitarian aid to people living in the world's crisis-hit areas.