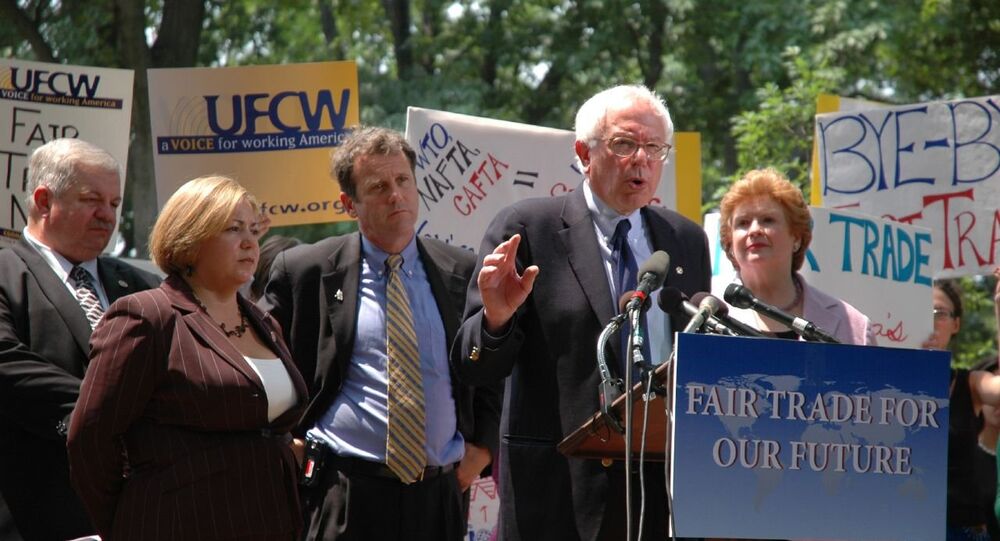 The Bernie Sanders' presidential campaign announced that the democratic hopeful brought his campaign back to Iowa by using locations for big meetings as his popularity continues to grow at the expense of frontrunner Hillary Clinton.

WASHINGTON (Sputnik) — Democratic presidential candidate Bernie Sanders brought his campaign back to the state of Iowa by using larger locations for meetings as his popularity continues to grow at the expense of frontrunner Hillary Clinton, his campaign announced in a press release.

"With turnout projections mounting… Sanders’ campaign has shifted locations of town meetings in Grinnell and Cedar Rapids," the press release read on Thursday.

© AP Photo / David Becker
Racing to 2016: Bernie Sanders Surges in Key Primary State
The Iowa caucuses on February 1 are the first hard political event of the ten-month long presidential campaign, when caucuses from both major US parties choose their favored presidential candidates.

Sanders started out trailing Clinton in Iowa by more than 30 percent, but according to a new Des Moines Register/Bloomberg Politics poll, he has closed the gap to seven percent, pulling 30 percent support to only 37 percent for Clinton.

On Monday, which is the Labor Day holiday in the United States, Sanders will travel to the state of New Hampshire, which holds the first primary on February 6. Recent polls show Sanders holding on to a seven percent lead over Clinton there.