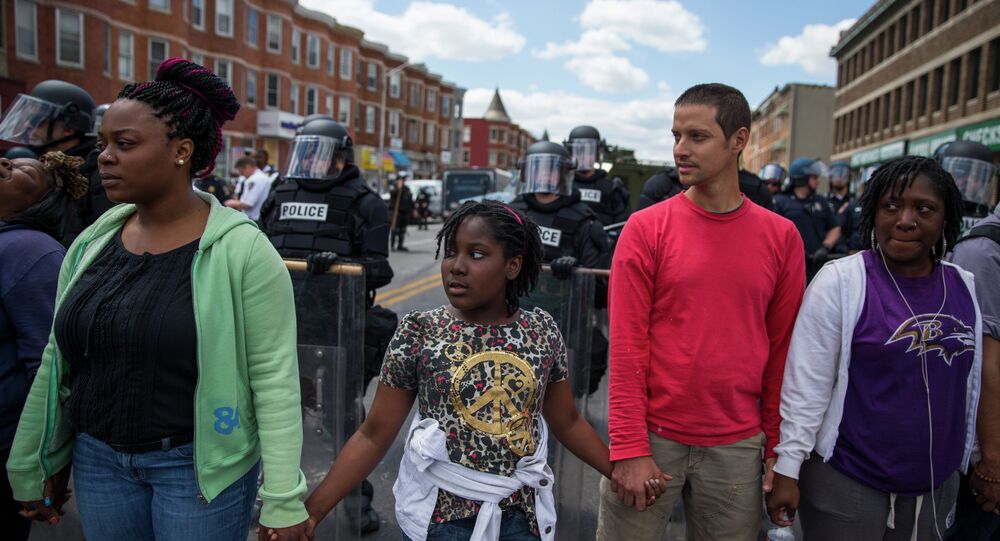 On Wednesday, according to Baltimore Police, around 75 protestors descended on the city to protest the trial of the six officers despite warnings by law enforcement that they would be arrested if they do not disperse.

Occupy Baltimore explained the peaceful protestors have not conducted any serious violations.

"The worst offense any of them have been arrested for is ‘obstructing traffic’ or 'trespassing’ at City Hall," Occupy Baltimore said. "Those trespassing charges have always been ultimately dropped without prosecution."

Earlier on Wednesday, Baltimore police arrested one person, but said it did not use tasers during the arrest. Police also stated that most protesters have been cooperative and did not block roadways.

© AP Photo / Baltimore Police Department via AP, File
Baltimore Activist Arrested, Judge Won't Drop Charges Against Cops in Freddie Grey Case
The court hearing comes nearly four months after 25-year-old Gray died of spinal cord injuries on April 19 while in Baltimore police custody. Gray’s death was one in a string of police killings of mostly, but not exclusively, unarmed African Americans that had prompted protests against police brutality throughout the United States.

Followings Gray’s death, riots swept through Baltimore during which the authorities declared a curfew and deployed the Maryland National Guard. Police arrested more than 250 people then.

In May, a grand jury indicted the six police officers involved in the illegal arrest of Freddie Gray and his subsequent death. The officers now face charges on counts of assault, manslaughter, false imprisonment and misconduct in office.