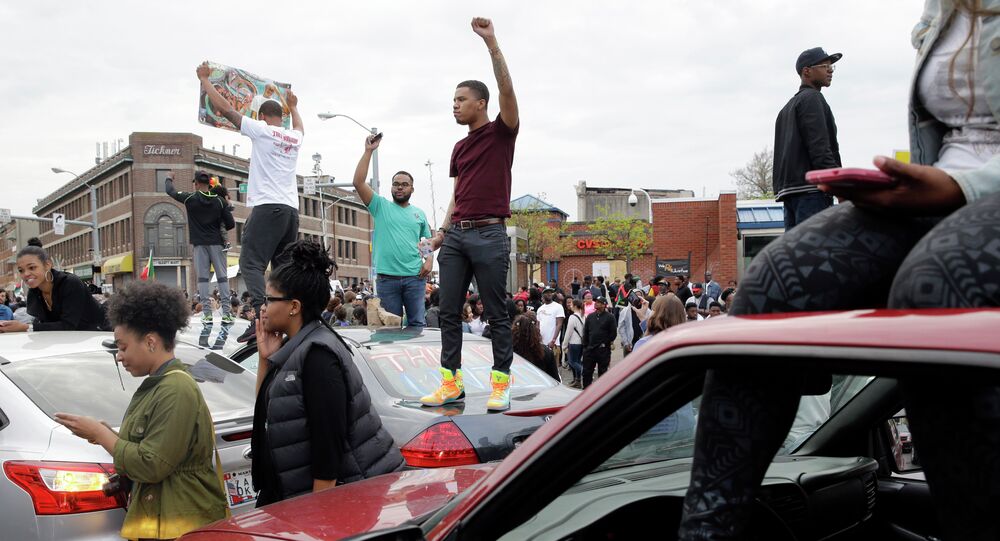 Baltimore Police Order Protesters to Disperse or ‘Be Subject to Arrest’

Protesters blocked traffic in the northeast US city of Baltimore on Wednesday ahead of the first court hearing of police officers charged in relation to the death of an African-American man earlier this year.

WASHINGTON (Sputnik) — Baltimore police have ordered demonstrators gathering amid hearings in the Freddie Gray case to disperse or be arrested, US civil rights activist DeRay Mckesson said in a Twitter message on Wednesday.

The announcement came quickly. All must disperse or be subject to arrest, even media. Baltimore. #FreddieGray

Earlier on Wednesday, protesters began arriving at the Baltimore Courthouse as legal hearings began in the case of the 25-year-old African-American Freddie Gray, who died of spinal injuries on April 19 while in police custody.

Scores of demonstrators gathered outside the courthouse in downtown Baltimore hours before the hearing, demanding indictments and convictions for the six suspended officers.

About 75 protestors in Baltimore braved police warnings they would be arrested as the first court hearing for six officers charged in the death of Freddie Gray is set to begin on Wednesday, according to the Baltimore Police Department.

"We have protestors in the area of Pratt and Calvert Streets. They blocked the roadway briefly. They have since been given direction to move out of the roadway," the Baltimore Police Department said via Facebook on Wednesday. "Most have acknowledged and moved to sidewalk. An arrest has been made."

City authorities closed down nearby streets and issued parking restrictions, while The Washington Post reported at least four sheriff’s deputies had been stationed on each street corner of the courthouse.

The pretrial hearings are expected to consider the defense attorneys’ request to remove city officials from the prosecution team and try the officers separately, according to WBAL.

It was not yet 10am when I snapped this photo. Told by officers they're "preparing" pic.twitter.com/vVhDAjTvxd

Some 448 people signed up participate in a protest organized by the Baltimore People’s Power Assembly through social media.

On Tuesday, local authorities erected barricades to contain large crowds anticipated to gather outside the hearings on Baltimore’s Calvert Street.

Mckesson claimed that Baltimore police came out ready to provoke protesters. He also published a video of social activist Kwame Rose being arrested by officers.

Y'all, the @BaltimorePolice are absolutely wild. @MayorSRB, I didn't think I could be more disappointed in you and your supposed leadership.

Baltimore police later confirmed having made one arrest, adding that most protesters "acknowledged" police instructions and moved to the sidewalk.

Gray’s death provoked protests as well as riots in Baltimore, a city overwhelmingly populated by African Americans, prompting authorities to declare a state of emergency and deploy the Maryland National Guard.