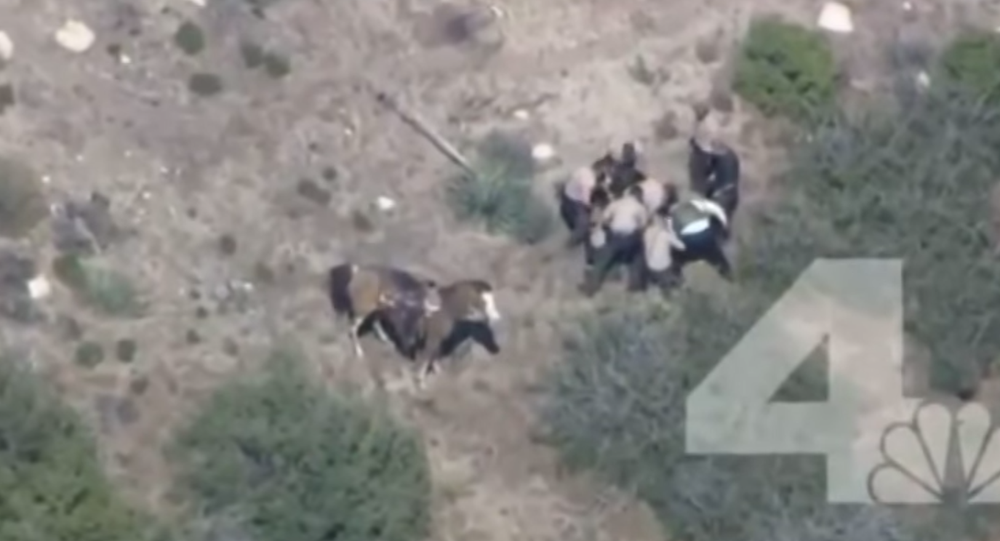 Three of the deputies caught on camera beating a suspect after a police chase of a man on horseback will be charged for excessive force, the district attorney announced today.

KNBC
Cops Charge California Man Who Got $650K Settlement After Police Beating
The incident took place in San Bernardino County, and was captured on camera by a news chopper that was covering the desert chase on April 9.  The three-hour long pursuit began when law enforcement attempted to serve a warrant to Francis Jared Pusok in an identity theft investigation.

Pusok ended up stealing a horse during the chase, and led deputies through the desert in his attempt to flee.  Eventually Pusok fell from the horse, and the brutal beatdown began.

In the horrifying video, a crowd of police, eventually growing to 11 sheriff’s deputies, can be seen piling on top of and pummelling Pusok.  He is kicked 17 times, punched 37 times, and hit with batons four times.  At least 13 of the blows were to his head.

Following the release of the video to the public, ten of the deputies were placed on administrative leave.  Pusok also won a $650,000 settlement from the county after San Bernardino Sheriff John McMahon admitted that the video showed excessive force.

In what some are calling a revenge move, Pusok was then charged with 14 felony and misdemeanor charges.

Now, San Bernardino County deputies Nicholas Downey, Michael Phelps and Charles Foster have each been charged with one count of assault by a public officer.

California Man Beaten by Cops on Video to Get $650K Settlement

California Cops Joke on Camera About Kicking an Amputee