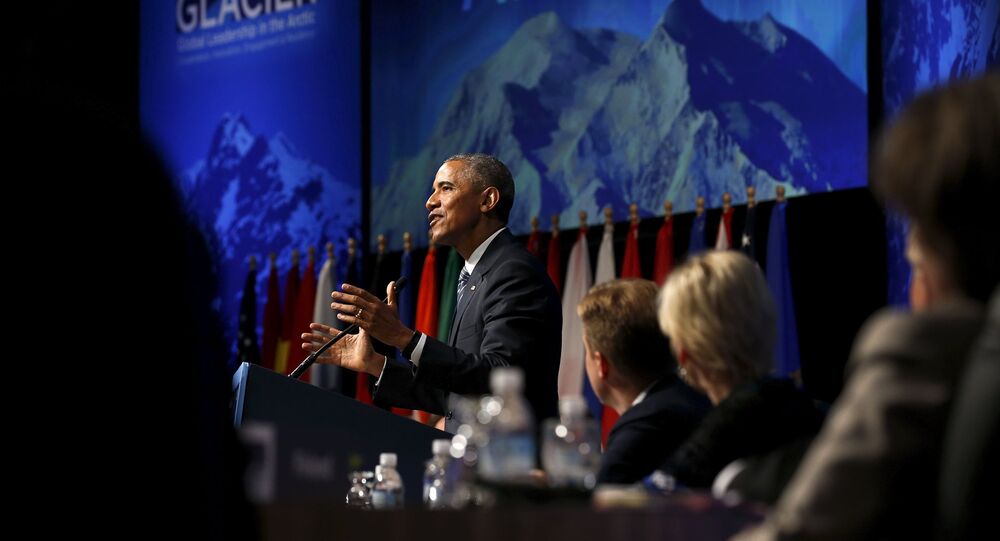 US President Barack Obama has called on world leaders to reach agreement to make sweeping cuts in carbon, or greenhouse gas emissions to stop global warming in its tracks, in a speech in Anchorage, Alaska.

WASHINGTON (Sputnik) – The United Nations Climate Change Conference, also known as COP21 or CMP11 will open in Paris on November 30 and continue until December 11.

"This year, in Paris, must be the year that the world finally reaches an agreement to protect the one planet we've got while we still can," Obama told the GLACIER (Global Leadership in the Arctic: Cooperation, Innovation, Engagement and Resilience) conference of international foreign ministers on Monday.

"The science is stark, it is sharpening, and it proves that this once-distant threat is now very much in the present," the US leader said.

© REUTERS / Jonathan Ernst
Obama Admits US Responsibility for Global Warming in Alaska Speech
Alaska and the Arctic were in the forefront of the global crisis, the president argued.

"Arctic temperatures are rising about twice as fast as the global average," he told the international gathering of foreign ministers. "The Arctic is [at] the leading edge of climate change."

Since 1979, summer ice in the Arctic had decreased by 40 percent, Obama said.

"Sea levels [around the world] are projected to rise one to four feet this century," he warned. "[The] climate is changing faster than our efforts to address it."

The president warned that the homes of more than 100,000 Alaskans who lived on permafrost were at risk when the warming effects thawed the foundations on which they had built and released massive emissions of carbon gases currently locked up in the frozen ground.