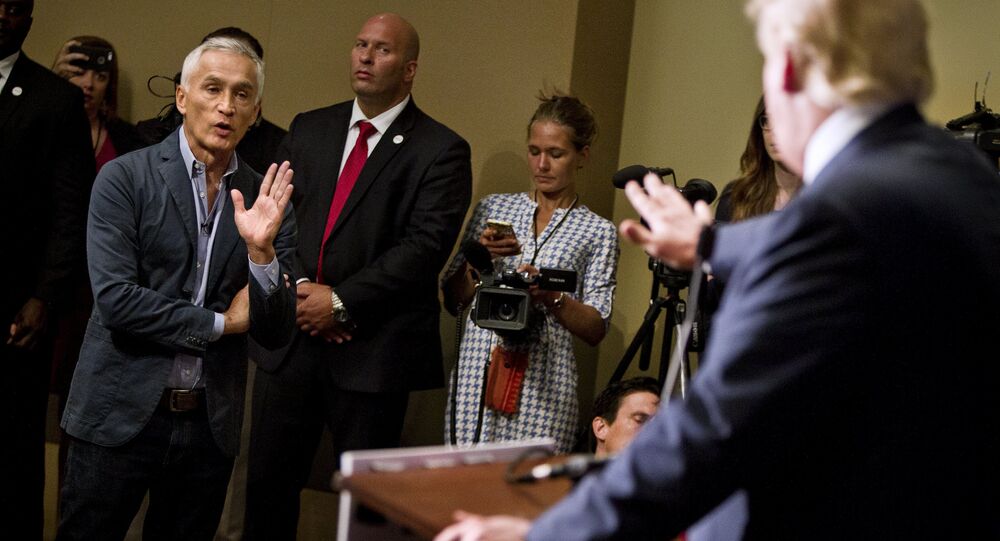 The National Association of Hispanic Journalists (NAHJ) responded to controversial US Republican presidential hopeful Donald Trump on Wednesday for kicking out a prominent news anchor from his press conference.

MOSCOW (Sputnik) – Trump had Mexican-American journalist Jorge Ramos ejected from his conference late Tuesday, telling him to "go back to Univision," a leading US Spanish-language broadcaster. Ramos returned to the conference later.

"Ramos was simply trying to hold a candidate for president accountable for statements he made about a very important topic to the American people," NAHJ President Mekahlo Medina said in a statement.

Trump campaigns on a strident anti-immigration platform, promising to send back an estimated 11 million undocumented immigrants to their home countries and to build a wall along the almost 2000-mile US-Mexican border.

Trump argued that he had Ramos removed by security guards because the reporter was not called on during a Q&A session.

© AP Photo / Charlie Neibergall
Man Inspired by Donald Trump to Beat Homeless Mexican
The two continued their exchange when Ramos resumed questioning the billionaire businessman on his campaign promises after being allowed back in.

The NAHJ president claimed the Republican front-runner "has avoided Mr. Ramos’ attempts for an interview to reasonably discuss Mr. Trump’s opinions and ideas about immigration."

Announcing his presidential bid in June, Trump classified immigrants from Mexico as "rapists" and "criminals."