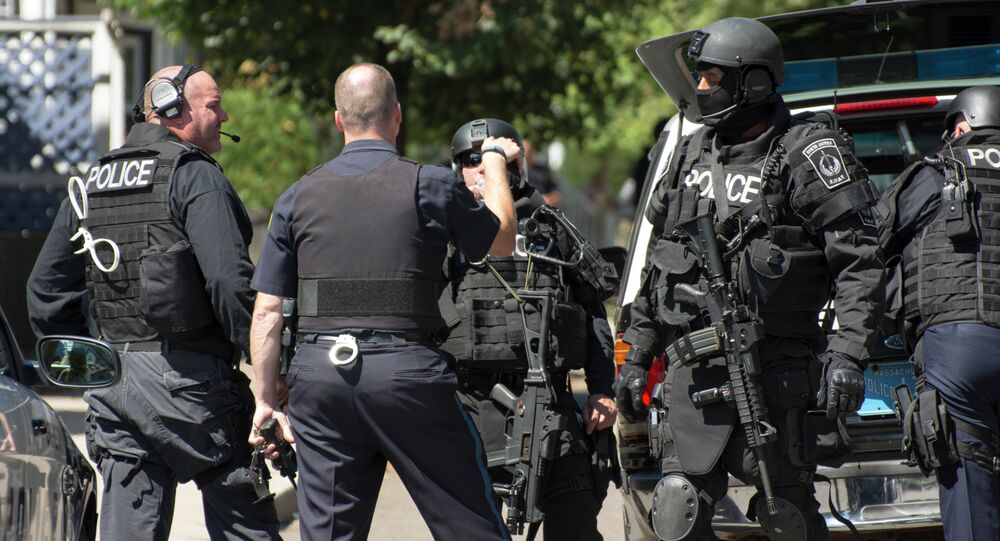 A Massachusetts couple is speaking out after their home was raided by a SWAT team who broke into the wrong house. The couple reports that they were held at gunpoint- along with their frightened children.

At approximately 5:30 a.m. on Wednesday, SWAT police in Worcester broke the front and back doors off of the home that Marianne Diaz, 23, lives at with her children, fiance, and a roommate.  The officers entered the home with their guns drawn.

“Stop (expletive) crying and take care of your (expletive) kids,” Diaz quoted an officer saying to the Telegram.

She explained that she had slept undressed to combat the heat and for 10 minutes she was held at gunpoint along with her frightened 18-month-old and 7-year-old daughters before being allowed to get dressed.  Her naked body was also searched by a female officer, including having to spread her legs.

“My (7-year-old) daughter was freaking out, she was just shaking, and she couldn’t stop.”  Diaz explained.  Her daughter suffers from a disability, leaving Diaz with concerns about lasting effects of the trauma.

The SWAT team seized no evidence during the no-knock raid, arrested no one, and did not find the man they were looking for on gun charges.  The reason being, he no longer lives there.  Diaz and her family moved into the apartment in May, after he was already gone.

“This botched gun raid, without any doubt, is about an innocent family with two children – one disabled — who were utterly terrorized and abused as a result of the grossly reckless conduct exhibited by (police),” lawyer Hector E. Pineiro told the Telegram. “There was virtually no due diligence and surveillance done to ensure that they got the right people.”

YouTube/Sarah DusekHD
No Discipline for Cop Who Illegally Entered Woman's Home, Arrested Her Naked Coming Out of Shower
Diaz’ fiance, 23-year-old Bryant Alequin, was awake getting ready for work when the officers entered his home.

“They twisted my arm and threw me to the ground,” Alequin said. “Shut the (expletive) up, we’ll tell you in a minute” he recounted the police telling him when he asked them what was going on.

The police maintain that they were acting on the best intelligence that they had available at the time- which obviously wasn’t good enough.