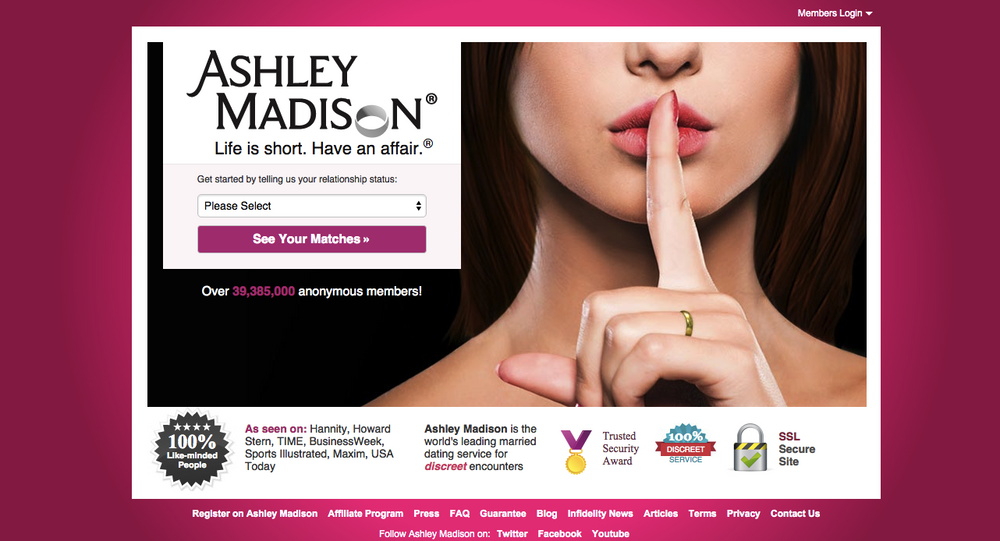 Two Canadian law firms have filed a $578 million class-action lawsuit against companies running the infidelity website Ashley Madison after hackers breached the site and spilled the dirty little secrets of some 39 million members.

Charney Lawyers along with Sutts, Strosberg LLP announced on Friday that they are leading the lawsuit on behalf of Canadians whose privacy was violated.

© Flickr / Pablo Daniel Zamora
Hackers Appear to Have Dumped Ashley Madison User Info on the Dark Web
With the slogan “Life is Short. Have an Affair,” Ashley Madison was built to facilitate extramarital relationships among its members.

The targets of the lawsuit are Avid Dating Life and Avid Life Media which own Ashley Madison.

According to the lawyers’ statement, many former users of the website approached them asking about their privacy rights under Canadian law. One such person is the plaintiff Eliot Shore. This widower said he joined the site while seeking companionship after losing his wife to breast cancer, but did not cheat or meet any other member of the site.

© REUTERS / Chris Wattie
Ashley Madison: Thousands of Naughty Gov't Officials Outed in Data Hack
“They are outraged that AshleyMadison.com failed to protect its users’ information,” said Ted Charney of Charney Lawyers. “In many cases, the users paid an additional fee for the website to remove all of their user data, only to discover that the information was left intact and exposed.”

The hackers, who are not part of the lawsuit, said they attacked the site as a punishment for charging users fees to delete their personal information from their databases, but not actually meeting their promise.

“The sensitivity of the information is so extreme and the repercussions of this breach are so extreme, it puts the damages faced by members in a completely different category of class-action suits,” Charney said.

© REUTERS / Chris Wattie
Ashley Madison Hackers Dump More Data Including Source Code, CEO Emails
This is the first class-action lawsuit led against companies in Canada, Charney proclaimed. Meanwhile in the United States, lawyers from Missouri filed a class-action lawsuit against Ashley Madison’s owners on behalf of an unnamed female plaintiff, who said she paid about $19 to have her information removed from the site. She is seeking more than $5 million in damages.

Ashley Madison maintains that the information hacked could not be used to identify its members or “prove the infidelity of their clients,” according to the Guardian.

Hundreds of the leaked email addresses appear to be linked to Canadian federal and municipal workers, as well as members of the police and military. Some of the transactions revealed in the breach were authorized on computers attached the Department of National Defense and the House of Commons.

Hackers initially breached Ashley Madison’s databases in July, according to the lawsuit. That information was released publicly on Tuesday.

The class-action lawsuit filed in Canada “still needs to be certified by the court,” according to the lawyers’ statement.