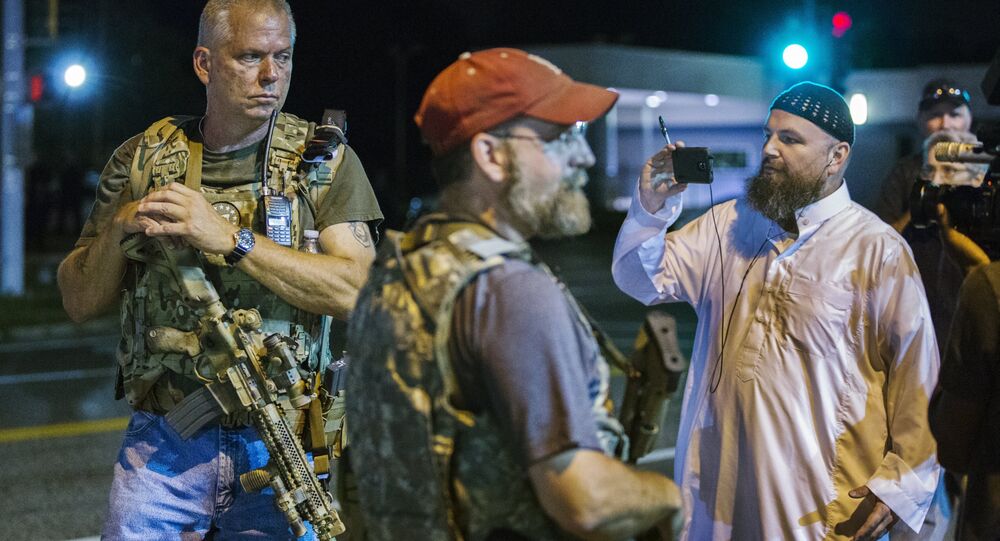 The constitutionalist group the Oath Keepers is planning to arm 50 black Ferguson protesters with AR-15s in response to law enforcement officers last week ordering the open carry group to put away their rifles while in city limits.

The protest, which they are aiming to hold by the end of the month, will take place with Oath Keepers surrounding the police brutality protesters, essentially daring the police to shoot.

Oath Keepers consist primarily of current and former law enforcement and military personnel who hold strong beliefs about the importance of the Second Amendment.

“Every person we talked to said if they carried they’d be shot by police,” Sam Andrews, head of the Oath Keepers chapter in St. Louis County told Red Dirt. “That’s the reason we’re going to hold this event, and it will be a legal demonstration. I’m sick and tired of law enforcement who doesn’t think they have to abide by the law. They’re narcissistic and that guy (the county police chief) discredited my men.”

Members of the Oath Keepers who were at protests in Ferguson in the days following the anniversary of the death of Michael Brown told Sputnik News that they were there at the request of their friend’s at Infowars who they were accompanied by.  The Infowars reporters have reportedly denied this claim, however.

“He (Belmar) was thumbing his nose at the legislature of the State of Missouri. It was like he couldn’t give a crap about the Bill of Rights or state law.” Andrews told Red Dirt News.

“The truth of the matter is Chief Jon Belmar of St. Louis County Police has been breaking our state law, threatening to disarm people, and violating people’s rights. They’ve been breaking Missouri’s revised statute 44.101. I would encourage everyone to look up for themselves. It prevents the police or any government official from disarming anyone during a state of emergency. Yet Belmar continues to threaten to do that and continues to try to intimidate anyone who is armed.” Andrews also told Truth in Media.

Open-Carry Texas
White Texas Open Carry Activists With Loaded Guns Defy Police, Are Let Go (Video)
When asked what Andrews would want to say to the protesters in Ferguson he responded saying that their group wants to help protect the demonstrators, and that black lives matter.

“The first thing I would say is ‘Black Lives Matter.’ The second thing I would say is that the Oath Keepers are there to protect your rights. We care about you, regardless of all the lies that the media and some other instigators have tried to propagate. Black lives matter, we care about you, we love you and we are there to protect you,” said Andrew.