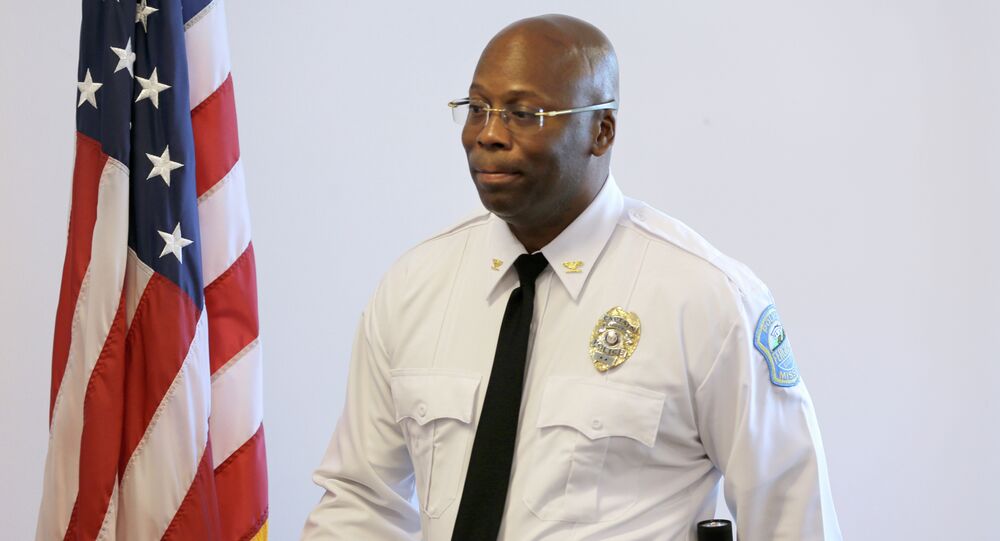 Andre Anderson, the police chief brought in on temporary reassignment in Ferguson to mend relations with the community, has a checkered past, it turns out, including allegations of striking a woman in the face. The department, however, is standing behind their new chief.

Anderson is a black interim police chief sent from Glendale, Arizona, in July, to help alleviate racial tension in the predominately black community which is served by a largely undiverse department.  The loan of sorts makes him the Ferguson police chief for six months.

Newly uncovered information shows that the 24-year veteran officer has been suspended several times during his career, three times in only 12 months, was accused of falsifying official documents, and previously had a protective order placed against him after he allegedly hit a woman in the face.

“On 29 July 1996, Andre C. Anderson struck me in the face and it caused severe headaches, swelling, and broken blood vessels around my lower eye,” the 1996 protective order stated.  Charges were never filed against him for the alleged assault.

According to Vocativ.com, these blemishes in Anderson’s past have the local Arizona law enforcement community wondering how and why he was selected to help in one of the most troubled and high-profile communities in the country.

“Three suspensions in a year is a problem…at that point, as an officer, you have to ask yourself if this work just isn’t for you—assuming a supervisor doesn’t make that decision for you.” Dave Lind, former assistant chief of police in Chandler and Tempe, Arizona, told Vocativ.

Anderson began his law enforcement career in Phoenix, Arizona, but ended up leaving for unknown reasons and working at a furniture store.  He later returned to policing in a much smaller town before applying and receiving a job with the department in Glendale.

“It would be like leaving the New York Times to go cover the sanitation department for the Podunk Post,” Bill Richardson, a former Arizona detective told Vocativ. “And when he left he went and worked at a furniture store? That doesn’t happen.”

Despite these issues, Anderson made officer of the year in 1994.

Details regarding the officer’s three suspensions in one year, from 1996-1997 were sparse as the department policy states that disciplinary actions can be removed from an employee’s personnel file after five years.

One of the two-day suspensions that year however, was in regards to his time with the Drug Enforcement Administration task force, where he had “significant problems.”

“Andre during this first rating period it was noted by your supervisors at D.E.A. that you were experiencing significant problems while assigned to the task force,” Sergeant David Donald wrote in a review of Anderson in 1996. “These problems led to the initiation of an internal investigation and your transfer back to the department. From the investigation you received a memo of correction and a two day suspension for conducting personal business on city time and falsifying official documents.” Donald did note, however, that “even with the problems you experienced you did an excellent job in your undercover activities.”

A spokesperson from the Ferguson Police Department responded to the website defending their decision and the chief.

“The allegation about falsifying documents actually involves a situation where Chief Anderson provided information on a mileage report in error, not out of an intentional, malicious action. The information regarding the DEA Task Force is a personnel issue and should remain so.  It should be noted that Chief Anderson has excelled in his law enforcement career with countless recommendations,” the statement read.

“He has also been promoted numerous times since each of the items you have questioned about his personnel file.”