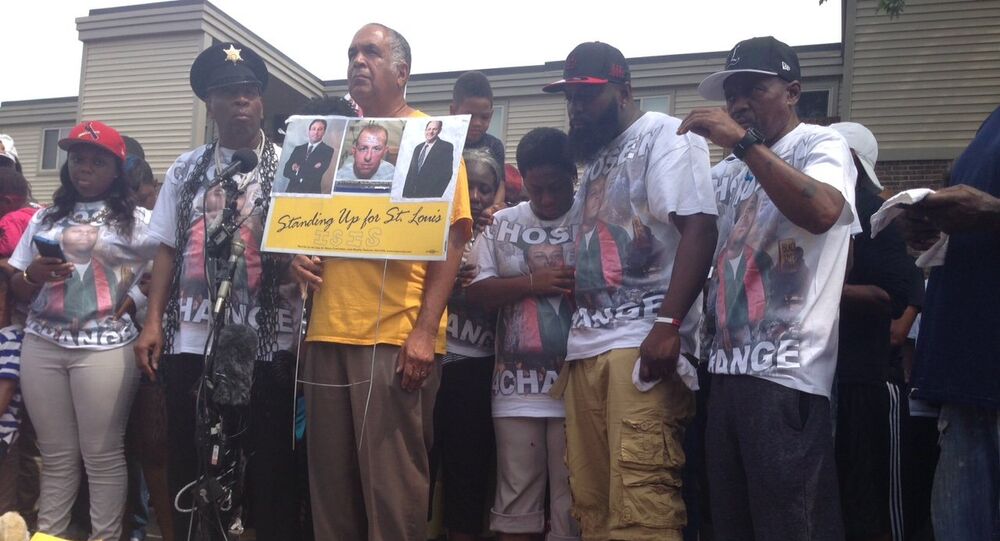 Hundreds of people have come to honor Michael Brown, the African-American teenager who was shot by police last year, at the place of his killing in the St. Louis suburb of Ferguson on Sunday.

© East News / AP Photo/Craig Ruttle
Michael Brown Family's Lawyers to Present New Evidence in Ferguson Shooting
FERGUSON (Sputnik) – The memorial event started at 11:35 local time [16:35 GMT] with Pastor Cori Bush praying for Brown and to give strength to his family. Her speech was followed by the representatives of the activists groups, including Chosen for Change established by Brown's father, Michael Brown Sr.

The daughter of Eric Garner and family members of other people killed by police joined the memorial event. The speakers once again spoke about the issues of police violence and racism raised by the tragic shooting.

Demonstrators were holding signs reading "Hands up! Don't shoot,” “We will not forget,” “I am Mike Brown,” “Black lives matter,” “We stop killing each other,” “Lost voices still united,” and “Racism is destroying America."

An unmanned aerial vehicle, or a drone, was flying regularly above the area of the protest and the neighborhood during the course of the speeches.

At 12:02 local time the protesters observed a four and a half minute moment of silence. This time represents four and a half hours Brown's body lay in the street after he was shot dead. Brown's father was standing in the front row.

Attendees counted down the last 30 seconds aloud and let white pigeons out of a cage into the sky.

Toys and lit candles, along with the US flag, covered the spot where Brown was killed by white police officer Darren Wilson on August 9, 2014.

The spokesperson stressed that the city had taken all the necessary measures to keep the city safe over weekend.

August 9 marks first anniversary of Brown's death, which has come to symbolize police brutality and difficult race relations in the United States.

Brown's death touched off a series of violent riots in Ferguson that subsequently spread across the United States and renewed calls to improve strained ties.

The march is part of a wider series of events organized in commemoration of Brown’s death scheduled for August 7-10.