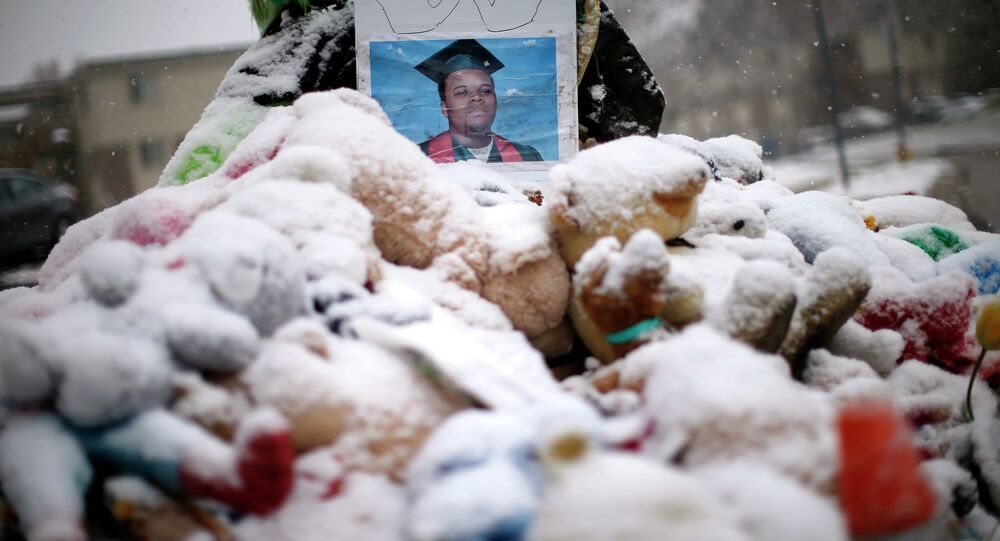 © Sputnik / Jim Young
Ferguson Remembers Michael Brown, Demands Justice for All
WASHINGTON (Sputnik) — Brown’s death at the hands of a white policeman triggered mass protests across the United States and ignited a national debate on racial inequality and the use of excessive force in the policing of minority communities.

The teenager was said to have been a suspect in a convenience store robbery. Local authorities, however, said the police officer was not aware of the fact at the time. According to the city’s police, Brown was stopped because he was "walking down the middle of the street blocking traffic."

The official autopsy of Brown showed that the teenager had been shot at close range possibly trying to go for the officer's firearm. Forensic experts have found that Wilson fired his weapon no less than six times.

Violent riots erupted in Ferguson following the deadly shooting. SWAT team forces in riot gear confronted hundreds of protesters. Police fired tear gas and rubber bullets at the crowd. Some demonstrators fought back by throwing Molotov cocktails and other objects at the officers.

Protests over police brutality also erupted in other US cities, including Washington, DC. On August 24, hundreds of peaceful protesters took to the streets in the US capital to show support for Michael Brown and stand in solidarity with the people of Ferguson.

The protesters demanded the arrest of the police officer who shot the teenager, as well as the demilitarization of the police, and the institutionalization of civilian review boards of the police with the right to hire and fire.

On November 25, 2014, a St. Louis grand jury found Darren Wilson not guilty in the death of Brown. Wilson told reporters that he did his job right.

A new wave of violent protests erupted in Ferguson after the grand jury’s decision. Demonstrators set fire to several businesses and police cars, while police officers resorted to tear gas to disperse crowds.

The United States has seen a spike in police killings since Brow’s death. US police have killed at least 360 people since the beginning of 2015, according to the Killed By Police incident-monitoring website. In most of the cases police officers used excessive force against African-Americans.

In December 2014, US President Barack Obama requested congressional approval for a $263-million grant to equip police officers with body cameras that would record officers’ interactions.

To commemorate Brown’s death on August 9, 2014, Don’t Shoot Coalition alongside churches and activist groups is holding events across the St. Louis, Missouri region between August 7 and 10.