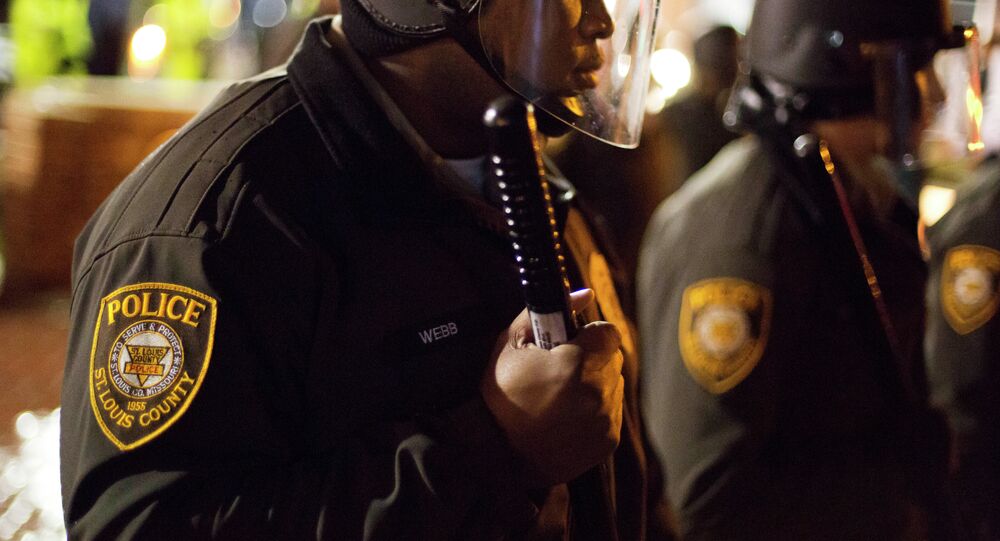 Several hundred law enforcement officers are ensuring that the city of Ferguson is safe amid the ongoing memorial events dedicated to the first anniversary since Michael Brown’s death, official spokesperson for the City of Ferguson Jeff Small told Sputnik.

The spokesperson stressed that St. Louis County police were also involved as far as assistance, as well as the Missouri Highway patrol, the FBI, and the Bureau of Alcohol, Tobacco, Firearms and Explosives.

"Fourty-eight officers from Ferguson Police Department, some 200 from St. Louis County that are on the ground in different spots, and some 100 of Missouri patrol. The emergency officials are on standby. We have called extra fire departments from around the community that have now come to Ferguson just in case they are needed for any reason."

Small pointed out that this year’s plan of the safety protection during the protests took months to be prepared, and its specifics is to make sure that it does not feel and look like police are everywhere, although there are.

"You might see that many of the officers instead of the uniform may wear polo shirts and jeans. They will be out engaging with protesters, talking to them, making sure they have bottled water, and still performing duties of a police officer. It’s kind of a software approach this year. Also there are a number of undercover officers that are involved in different areas of the cities. At nightfall you will see more another assistance coming for example from St. Louis."

The spokesperson also underlined that the world’s perception of the last year’s protests was taken into account.

"A lot of it this year is making sure that the perception is not what it came across last time, because what resonated many people around the world was image of dogs being in from of people as well as guns being pointed at unarmed protesters. But there are many plans in place to make sure that everyone is safe."

The spokesperson also underlined that most officers are in places where they can be called upon at a moment’s notice if needed.

Small warned about possible road closures throughout the weekend.

"We want to protect everyone driving through the area. We are trying to close as few roads as possible, but there are some road closures that will take place throughout the day and night as needed."

"We have gone above and beyond to make sure that this is safe and allow everyone to protest, we know it is going to happen and we welcome it. Peacefully," Small concluded.