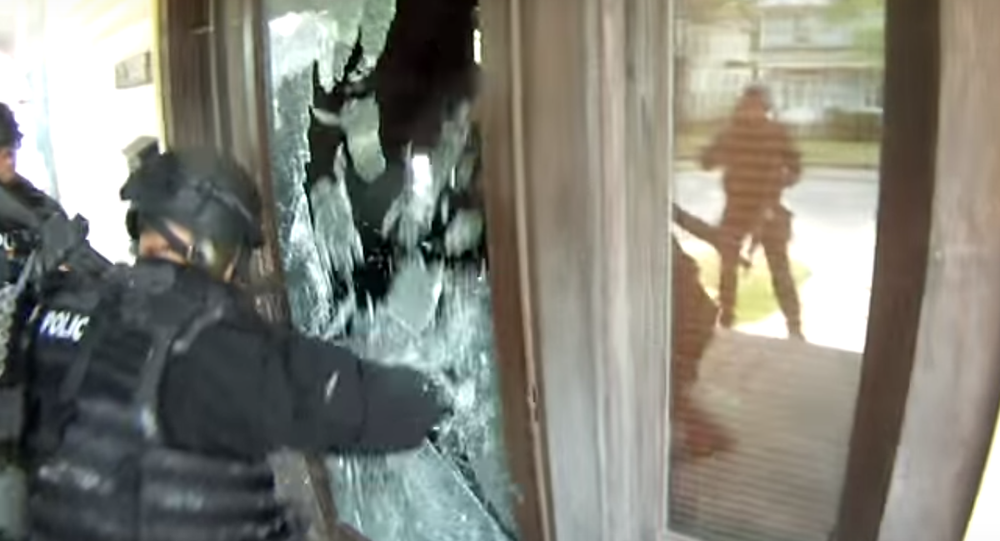 A court has decided that a SWAT team in Evansville, Indiana, has no legal immunity in a lawsuit filed by a family who had their door kicked in and flashbang grenades thrown inside their home, when the team raided the wrong house.

© AP Photo / Susan Walsh
Unarmed South Carolina Teen Shot in Back by Cops During Marijuana Raid
Police were reportedly receiving threats to themselves and their families, which is what prompted the deployment of a SWAT team to the home of an 18-year-old girl and her grandmother.  The officers smashed through an open door and threw flashbang grenades, meant to temporarily disorient an enemy with a blinding flash of light and an intense noise, before seizing the teenager’s computer and cellphone.  The threats had reportedly came from an IP address belonging to the Milan family.

The whole ordeal was captured on TV cameras from a local reporter that the team invited along for show.

The problem is, the family that was attacked never wrote the threats. They simply left their WiFi unsecured, meaning that anyone nearby could use it.

Reason noted that, around 5:30, an officer can be heard saying “here’s a cat,” and another officer seemingly responded with “I’ll kick it,” though it is not verified that he was talking about the animal.

The family was never charged with any wrongdoing, and when the department realized how over-the-top the first raid was, they reportedly went much softer when they approached the correct house on the same street.

Even though law enforcement was now sure they had identified the home of the suspect, and that that person was threatening to bomb police, they sent only one officer to the door, minus the SWAT team.

"We did surveillance on the house, we knew that there were little kids there, so we decided we weren't going to use the SWAT team," the police chief told the Evansville Courier and Press after the second raid. "We did have one officer with a ram to hit the door in case they refused to open the door. That didn't happen, so we didn't need to use it."

The police replaced the door, a window, and a burnt rug that were destroyed during their show-of-force on the Milan family.

The family is now seeking an unspecified amount in compensation for emotional distress, damages, and attorney’s fees.  They also hope that the lawsuit will bring about changes with the SWAT team’s procedure so that they do not victimize any more families.

Man Paralyzed After Raid by Police Suspecting He Was Selling Marijuana