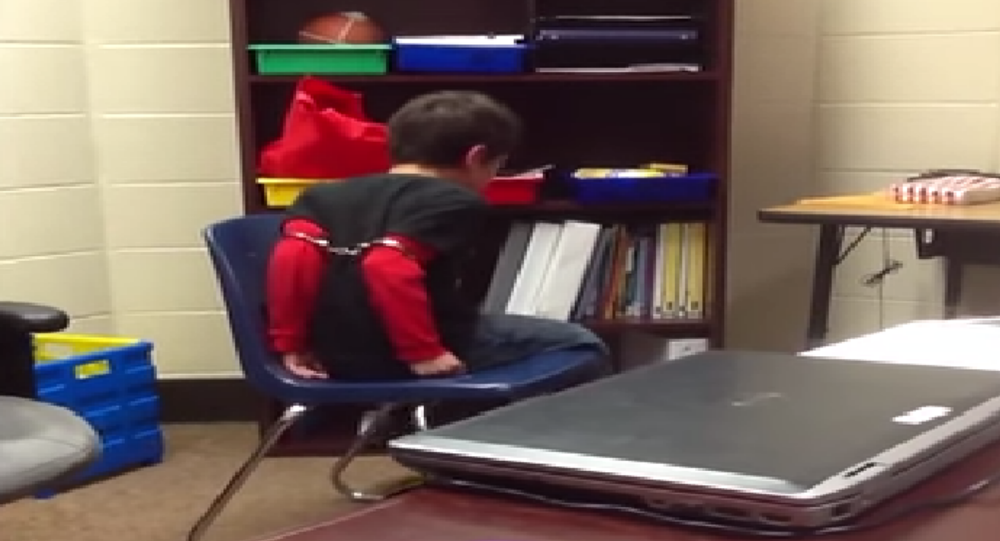 Two elementary school students from Kentucky were traumatized after a deputy sheriff handcuffed the kids for behavior associated with their learning disabilities, a lawsuit filed on Monday claims.

The two children, an 8-year-old boy and a 9-year-old girl, were so little that Sumner had to lock the handcuffs around their biceps behind their backs, causing the children to cry and scream out in pain.

Newly released footage shows the boy, a 52-pound Latino child identified only as SR, being shackled.  SR has a history of trauma and struggles with attention deficit hyperactivity disorder.

The female child, an African-American minor identified as LG had been handcuffed by the school resource officer before. She also has ADHD as well as other special needs.

"Shackling children is not okay. It is traumatizing, and in this case it is also illegal," Susan Mizner, disability counsel for the ACLU, told WKYT. "Using law enforcement to discipline students with disabilities only serves to traumatize children. It makes behavioral issues worse and interferes with the school’s role in developing appropriate educational and behavioral plans for them."

Neither of the children were arrested or charged with any criminal acts.

According to WKYT students with disabilities make up 12% of student populations, but make up 75% of those physically restrained by adults during school hours.  They also state that children of color are disproportionately affected by this type of discipline.

"Kentucky’s school personnel are prohibited from using restraints, especially mechanical restraints, to punish children or as a way to force behavior compliance," Kim Tandy, executive director of the Children's Law Center, told WKYT. "These regulations include school resource officers. These are not situations where law enforcement action was necessary."

In addition to damages, the lawsuit also seeks to require additional training for school resource officers.

"It is heartbreaking to watch my little boy suffer because of this experience," SR's mother, identified as TR, told the local paper. "It's hard for him to sleep, he has anxiety, and he is scared of seeing the officer in the school. School should be a safe place for children. It should be a place they look forward to going to. Instead, this has turned into a continuing nightmare for my son."

The law firm working on the case has stated that the resource officer’s involvement with disciplining the children was harmful and unnecessary and served to escalate the situation instead of helping.