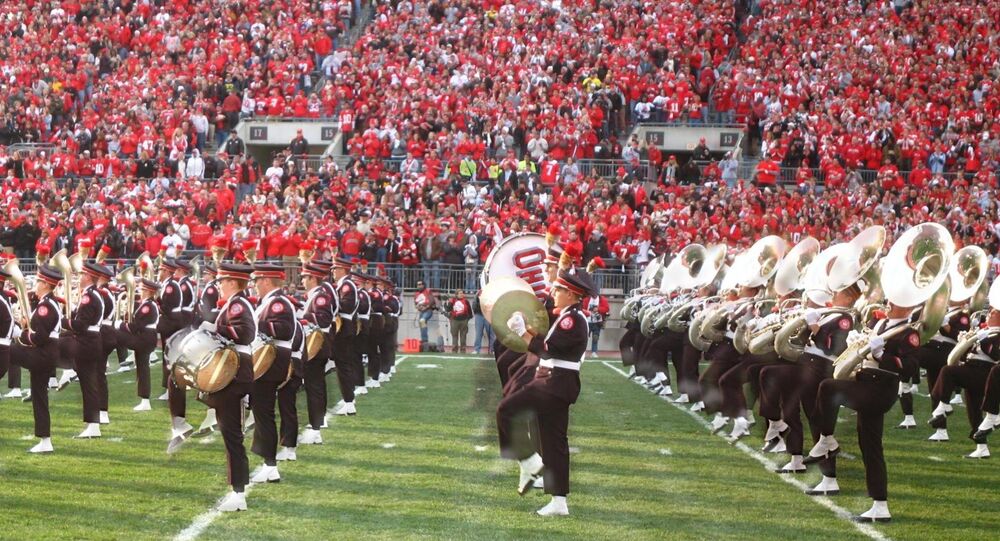 A recently uncovered "secret" parody songbook compiled by the marching band of Ohio State University details the disturbing sense of humor of one of America’s most storied ensembles.

In the world of competitive college marching bands, few can compete with that of Ohio State University. The self-described "Best Damn Band in the Land," the Buckeye marchers have won a number of awards and performed during the inaugurations of presidents Hoover, Nixon, H.W. Bush, W. Bush, and Barack Obama. They even landed a spot in an iPad commercial.

That reputation has taken a number of hits in recent months, perhaps none so cringe worthy as the latest discovery by the Wall Street Journal.

"Take it with you on trips and to parties. But never leave this out of your sight," reads an insert from the band’s parody songbook. "This book is for OSUMB members only, Past and Present. If they were not out on the field in front of 105,000 crazy fans in black (OK, navy blue) wool uniforms, they do not deserve to see this."

Why all the secrecy? Mostly because those parody songs contain grossly offensive lyrics.

One song, entitled "Goodbye Kramer," is set to the tune of Journey’s 1981 hit, "Don’t Stop Believin’." It describes a "small town Jew…who took the cattle train to you know where," and includes lines about Nazi soldiers "searching for people livin’ in their neighbor’s attic."

The song goes on to describe other graphic details of the Holocaust.

The songbook, written in 2012, also contains other songs with references to bestiality, rape, and homophobic slurs.

An introductory section to the book says that some songs "may be offensive to you. If so, you can either ignore them, or you can suck it up, act like you got a pair and have good time singing them."

The university has known about the book’s existence since July 2014, after an investigation into the band’s "sexualized" and "abusive" culture.  Director Jonathan Waters was fired after Ohio State determined he had turned a blind eye to much of the misconduct.

Waters claims he was aware of the offensive songbook, but banned it when he became the director.

"I never saw the 2012 version which included the Holocaust song," he said in a statement. "I think the whole idea is repulsive."

Waters is currently suing the university for his termination, arguing that he has become the scapegoat for a broader, systemic problem in place long before his arrival.

"They took 50 years of college behavior and silliness and tradition and put it all on me," Waters said, according to the Wall Street Journal. "I was the culture reformer."

Ohio State has described the lyrics as “shocking behavior” and pledged to rid the marching band of its more unsavory elements.