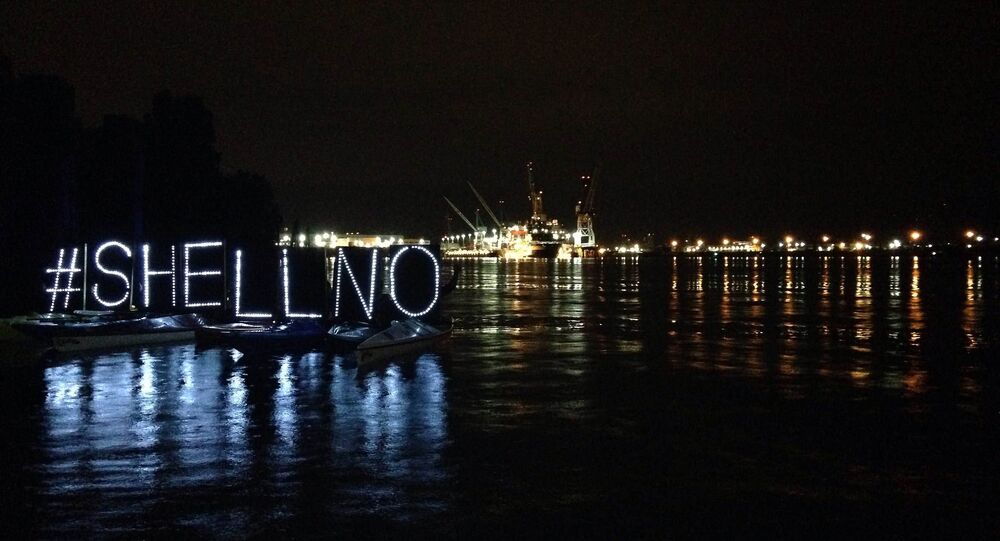 Environmental activists have been blocking Shell Oil's icebreaker the MSV Fennica from drilling in the Alaskan Arctic for more than 24 hours by hanging themselves from the St. Johns Bridge in Portland, Oregon.

© Sputnik / Igor Ageyenko
Russia to Hold First Arctic Drills on Strategic Facilities Defense in 2015
Greenpeace is concerned about the damage arctic drilling could bring to populations of whales, polar bears and walrus, especially since Shell ships have experienced engine failures before and discharged oil waste into Arctic waters.

According to Greenpeace USA, there are currently 26 activists on the bridge, and 13 of them are hanging from it on ropes and continue to blockade the passage of the Fennica ship in the hopes of shortening Shell's drilling season, which ends in October. Having enough food, water and diapers to endure several days, the protesters are ready to hold the line for as long as they can.

"The longer we can keep Fennica docked, the longer we can delay exploratory drilling in the arctic," said Meredith Cocks, an organizer with local climate action group Portland Rising Tide.

Shell's MVS Fennica met the unexpected obstacle earlier Thursday on its way to the open ocean and was made to head back to port, accompanied by shouts of approval from locals who arrived at the scene to show support for the activists. Some supporters gathered in the river below on boats and in kayaks in a concerted effort to sustain the blockade.

"The activists went to sleep last night prepared for this moment, and they were in incredible spirits hearing the support from local Portlanders below and from people around the world," said Cassady Sharp, Greenpeace USA's media officer in Portland.

"The one person they really hope is listening is President Obama. There has never been a better time for our President to do the right thing and cancel Shell's lease to drill in the Arctic."

The company's Arctic drilling operations have long been the matter of controversy. In May 2015, the US government approved a drilling lease that would allow Shell to drill in the Chukchi Sea.

Unprecedented support has poured in from all over the globe, encouraged by live media reports from the scene. Opponents of Arctic drilling can follow the events in Portland by watching live streams provided by local news outlets or by checking for updates on the Greenpeace blog. Many climbers on the bridge have access to social media and are posting updates using the #ShellNo hashtag.

Tons of support from folks on the ground especially after this mornings successful hang off. #ShellNo thank you #PDX pic.twitter.com/SUDhsQfShy

Police have arrived on the scene and threaten to carry out arrests, claiming the actions of Greenpeace activists are a violation of local laws and a federal injunction. The problem of removing protesters from the Portland bridge, however, remains a challenge.

Coast Guard picked up their first kayaktivist with a pick. Long arm of the law cometh #ShellNo pic.twitter.com/cXjP1SftsS

US District Court Judge Sharon Gleason ordered Greenpeace to pay a fine of $2,500 per hour for every hour the organization's activists continue to block Shell's ship from proceeding.