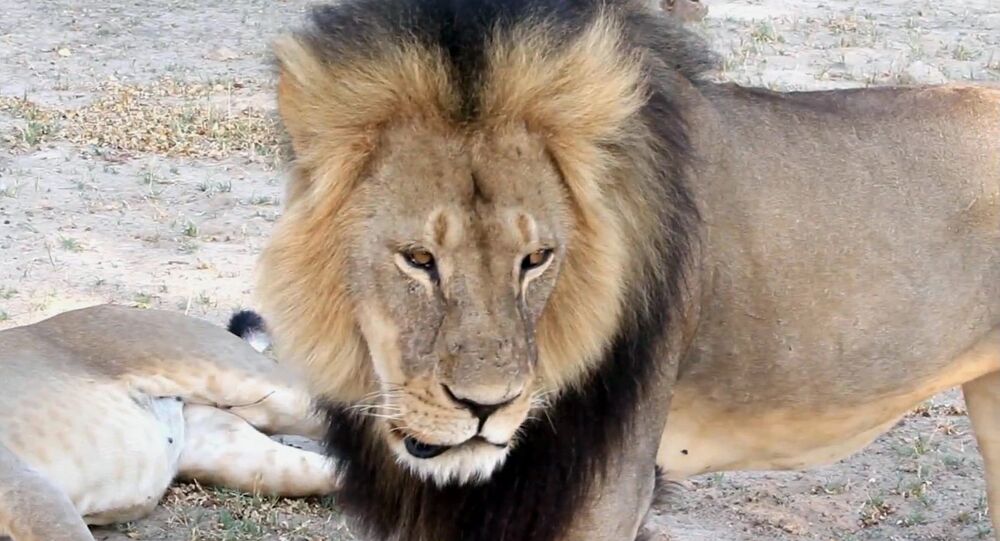 The “hunter” who made Cecil the world famous lion suffer for 40 hours after skewering him with a crossbow before shooting, skinning and beheading the King of Beasts, has been identified as a dentist from Minnesota. In a poetic twist, he’s become the subject of an international hunt by Zimbabwean authorities and an outraged international public.

The Zimbabwe Conservation Task Force named Walter Palmer, 55, of Eden Prairie, Minnesota — owner of Palmer’s River Bluff Dental in Bloomington — as their primary suspect, before Palmer admitted to the kill on Tuesday.

The 13-year-old lion, famous for his unique black mane, is believed to have been killed on July 1, during a poaching trip which cost Palmer over $54,000. The lion’s body was not found until several days after his death.

"He never bothered anybody," Johnny Rodrigues, the head of Zimbabwe Conservation Task Force, told The Telegraph. "He was one of the most beautiful animals to look at."

The lion was a resident and tourist attraction at Zimbabwe’s Hwange National Park, where he enjoyed protected status and the adoration of local and tourist fans alike. The evening of the fatal hunt, Palmer and local guides allegedly — and illegally — used bait to lure Cecil out of the park before Palmer shot him with a crossbow.

Injured, but still alive, Cecil fled from the bloodthirsty savages, but was unable to find help. He was discovered by the poachers 40 hours later, at which time he was shot dead with a gun, his body was beheaded, and his pelt removed.

Cecil was fitted with a GPS collar that allowed authorities to track his movements, which the poachers subsequently attempted to destroy.

As if the story couldn’t be more tragic, Cecil had six cubs.  With their father gone, those cubs will now likely be killed by the next dominant male lion.

“The saddest part of all is that now that Cecil is dead, the next lion in the hierarchy, Jericho, will most likely kill all Cecil’s cubs,” Rodrigues told the Star Tribune.

Two of the men who assisted Palmer in the hunt are facing poaching charges — charges which Palmer himself is no stranger to.

In 2008, Palmer pleaded guilty to federal poaching charges after killing a black bear in Wisconsin, 40 miles outside of the legal hunting zone.  He was sentenced to one year of probation and fined $3,000, clearly not harsh enough a penalty to deter him from killing again, as many photos of him holding the carcases of rare species have surfaced online.

The ZCTF has stated that they are looking for Palmer, though they believe he has left the country.

"We arrested two people and now we are looking for Palmer in connection with the same case," police spokeswoman Charity Charamba told reporters.

So with the tables turned, Palmer seems to have become the prey. Beyond being hunted by the ZCTF, social media users outraged at the disregard for wildlife’s majesty have also begun hunting down any information they can find. Many people have even called for the dentist’s death.

Palmer’s River Bluff Dental has been shuttered for business, with a note posted on the door with the contact information for a PR firm ostensibly hired in the wake of public outrage, and the practice’s Facebook page and website have been closed.

By Tuesday afternoon, his rating on crowd-sourced review site Yelp had fallen to one star, and the page was flooded with 1906 reviews, none of which were complimentary.

“Dr. Palmer, I can only hope that when your time comes, karma takes over and puts you through even worse suffering, than what you did to Cecil the Lion,” Andrea M. from New York City wrote in her review. ‘You are an evil man, a coward. Dare I say some sort of devil. You will get your comeuppance and many, MANY people will dance with joy."

“Too bad this was not one of the many Dentist that commit suicide,” Mike W. from Middleton, Massachusetts wrote in his one-star rating.

Palmer’s website, prior to being taken down, shared information about the dentist’s interests:

"Anything allowing him to stay active and observe and photograph wildlife is where you will find Dr Palmer when he not in the office."

It failed to mention that he doesn’t only get blood on his hands at the office.

Even Piers Morgan, the British journalist and television personality known for ruffling feathers, got in on the outrage, writing a piece for the Daily Mail entitled “I’d love to go hunting one day with Dr. Walter Palmer the killer dentist… so I can stuff and mount him for MY office wall.”

On Tuesday evening, the big-cat-killer issued a statement defending himself:

"In early July, I was in Zimbabwe on a bowhunting trip for big game. I hired several professional guides and they secured all proper permits. To my knowledge, everything about this trip was legal and properly handled and conducted.

"I had no idea that the lion I took was a known, local favourite, was collared and part of a study until the end of the hunt. I relied on the expertise of my local professional guides to ensure a legal hunt,” Palmer wrote. “I have not been contacted by authorities in Zimbabwe or in the US about this situation, but will assist them in any inquiries they may have. Again, I deeply regret that my pursuit of an activity I love and practice responsibly and legally resulted in the taking of this lion."

On the same day, the Zimbabwe National Parks issued a statement confirming that “all persons implicated in this case are due to appear in court facing poaching charges.”

Meaning that they want Palmer back.

"Both the professional hunter and land owner had no permit or quota to justify the offtake of the lion and therefore are liable for the illegal hunt," ZNP’s statement asserted.

Theo Bronkhorst, a professional hunter with Bushman Safaris who assisted Palmer in the kill, stated that he was unaware of Cecil’s fame, but like Palmer, had no remorse about potentially killing seven African lions that conservationists warn are facing extinction in the next 35 years.

"It was a magnificent, mature lion. We did not know it was well-known lion. I had a licence for my client to shoot a lion with a bow and arrow in the area where it was shot," Bronkhorst said in a statement.

The two poachers who assisted Palmer are scheduled to appear in court on August 6, and could face up to 15 years behind bars.

Premier calls Russian law to get tougher on sea poachers