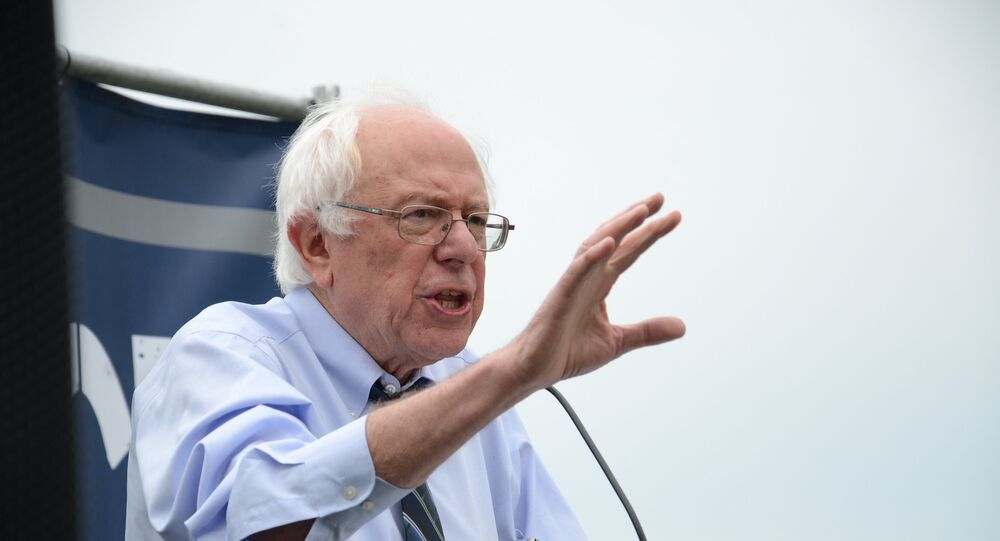 Bernie Sanders, one of the contenders for the Democratic presidential nomination, recently won support among America's working poor when he called the $7.25 an hour federal minimum wage a "disgrace" and introduced legislation to raise it up to $15 per hour.

Bernie Sanders' relentless fight for the whopping wage increase has become a key priority in his presidential campaign, securing the self-proclaimed socialist a fair share of support from unions, The Guardian reported.

"A job must lift workers out of poverty, not keep them in it," Sanders said during an outdoor strike at the US Capitol on Wednesday, amid a crowd of contract workers standing there in hopes of higher payments. "The current federal minimum wage of $7.25 an hour is a starvation wage and must be raised to a living wage."

SEIU (The Service Employees International Union) President Mary Kay Henry took a stand in a favor of the candidate's designs, saying that a $15 wage increase would both boost the US economy and drag full-time workers out of the poverty swamp.

© AP Photo / Carolyn Kaster
Bernie Sanders Draws in Biggest Crowd So Far in Conservative Arizona
However, not everyone is as supportive. Many prominent economists insist that a massive minimum wage hike could have dangerous and undesirable consequences; they claim that the proposed minimum wage would result in higher unemployment and even bankruptcy for countless businesses which rely on inexpensive unskilled labor.

James Dorn, a senior monetary policy expert at the Cato Institute, wrote last year in response to Barack Obama's call for a minimum wage increase: "A higher minimum wage — without a corresponding increase in the demand for labor caused by an increase in labor productivity (due to more capital per worker, better technology, or more education) — will mean fewer jobs, slower job growth, and higher unemployment for lower-skilled workers. Higher-skilled workers and union workers will benefit, but only at the expense of lower-skilled workers, especially the young and minorities. There is no free lunch."

In its July 25, 2015 edition, The Economist cited three expert studies cautioning against minimum wage hikes. Isaac Sorokin of the University of Michigan argues that industries slowly but surely automate in response to rises in the cost of labor, citing the example of sock-makers in the 1930s, which took years to switch to less labor-intensive machines after the federal minimum wage was introduced.

© AP Photo / Jacquelyn Martin
Bernie Sanders Rises in the Polls, Gains Support From a One-Percenter
In another paper, which he co-wrote with Daniel Aaronson of the Federal Reserve Bank of Chicago and Eric French of University College London, Sorokin analyzed restaurants that had closed down and re-opened after a minimum wage hike; one of his conclusions was that restaurants are often forced out of business and the ones that replace them are more likely to be chains which rely on machines.

In the third paper cited by The Economist, Jonathan Meer of Texas A&M University and Jeremy West of the Massachusetts Institute of Technology suggest that a mere 10 percent inflation-linked increase in the minimum wage could cut job growth by 0.3 percentage points per year, adding that "the effects on jobs growth they see are concentrated among people under 25, and those without a degree." Sanders' proposal would more than double the minimum wage.

Regardless of that, the $15 minimum wage proposition has met with unprecedented support from many lower-income American citizens.