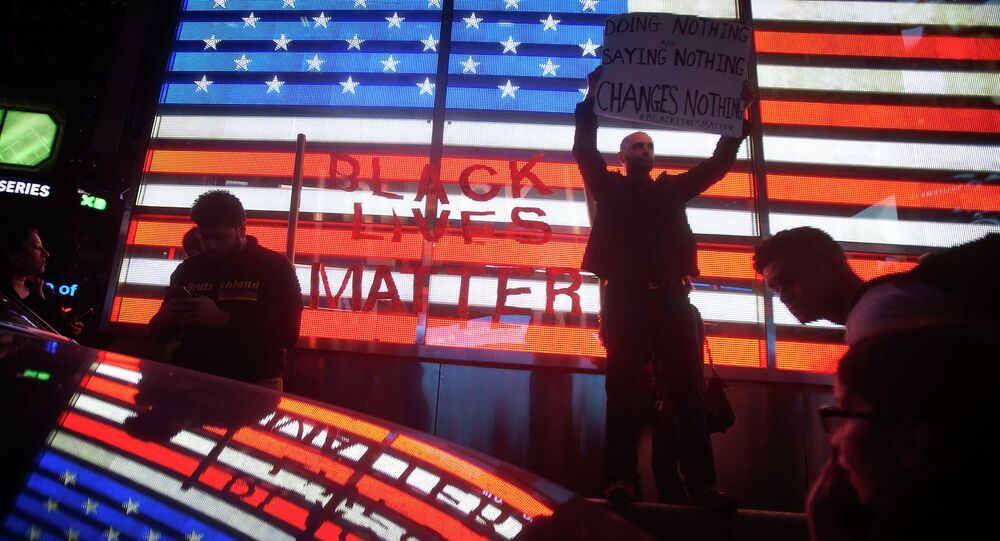 The Department of Homeland Security (DHS) has been monitoring the Black Lives Matter movement since anti-police protests erupted in Ferguson, Missouri, last summer, according to federal documents obtained exclusively by the Intercept.

According to the documents – released as the result of Freedom of Information Act request – the DHS often uses public social media accounts to collect information about Black Lives Matter activities. The DHS has conducted social media surveillance of events in Ferguson, Baltimore, Washington DC, and New York, the Intercept reported.

On August 11, the day after the fatal shooting of unarmed black teenager Michael Brown, a DHS officer used information from Twitter and Vine to monitor the riots that ensued in Ferguson. The officer also used social media to create a map marking the sites where conflicts occurred, per the documents.

Days later, a DHS email reported on the "National Moment of Silence," nationwide silent vigils planned in response to Brown's shooting. The email listed the cities with planned vigils and noted that they were being spread on social media with the hashtag #NMOS14.

Baher Azmy, a legal director at the Center for Constitutional Rights, said the DHS creating this body of knowledge about perfectly legal events is a problem in and of itself.

"What they call situational awareness is Orwellian speak for watching and intimidation," Azmy told the Intercept.

"Over time there's a serious harm to the associational rights of the protesters and it's an effective way to chill protest movements. The average person would be less likely to go to a Black Lives Matter protest if the government is monitoring social media, Facebook, and their movements."

This real-time information was compiled even though the FBI said there was "no information suggesting violent behavior is planned for Washington, DC" and that prior anti-police brutality protests in the wake of Ferguson "have been peaceful in nature."

The FBI also explicitly pointed out that the event was a "First Amendment-protected event."

"It is concerning that the government would be diverting resources towards surveilling citizens who are assembling and expressing their First Amendment rights," Maurice Mitchell, an organizer with Blackbird, a group that helps support activism against police violence in communities across the country, was quoted as saying by the Intercept.

"The fact that our government is doing this – I can only assume to disrupt us – is pretty alarming… Directly after 9/11, people said, 'If you're not doing anything wrong you have nothing to worry about.' Well, now we're fighting back against police brutality and extrajudicial killings, yet they are using this supposedly anti-terrorist infrastructure against us."

In April, after 25-year-old African-American Freddie Gray died from injuries sustained while in Baltimore police custody, DHS deployed more than 400 officers to the city to respond to Black Lives Matter activism, the Intercept reported.

Brendan McQuade, a DePaul University professor who researches the DHS, believes that the agency monitors Black Lives Matter so closely because the terrorist threats the DHS was created to stop are exceedingly remote.

Mitchell, the Blackbird activist, said the ongoing surveillance is designed to not only to keep tabs on black activists, but also to deter them from pushing forward.

"Surveillance is a tool of fear. When the police are videotaping you at a protest or pulling you over because you're a well known activist – all of these techniques are designed to create a chilling effect on people's organizing," he told the Intercept.

"This is no different. The level of surveillance, however, isn't going to stop us. After all, we organize because our lives depend on it."