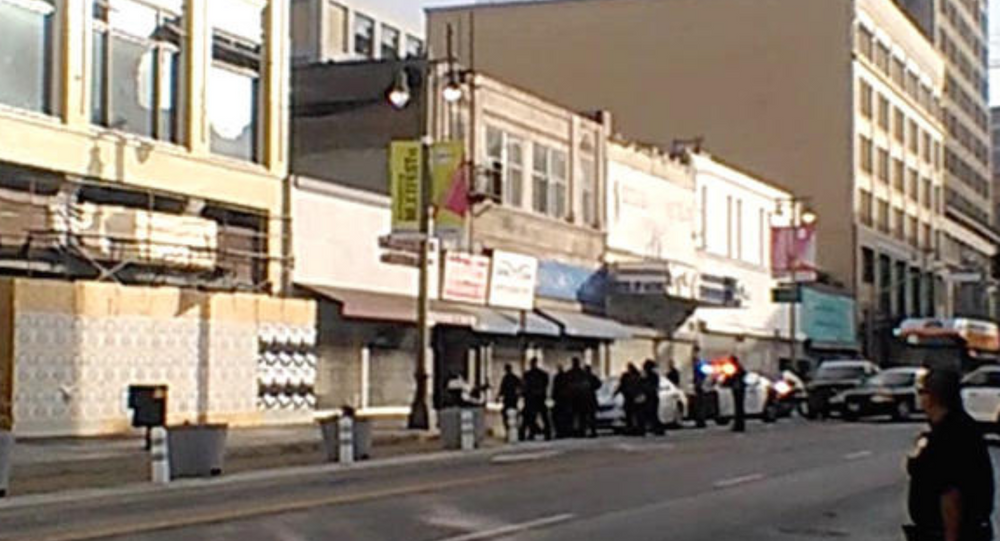 A video taken by a homeless resident of Skid Row in Los Angeles captured a disturbing scene where another homeless man in a wheelchair was surrounded by ten LAPD officers, tased, and shot with bean bags.

YouTube/Revolution News
Homeless Woman Faces Life in Prison for Picking Up Dropped LAPD Baton
Police claim that Christopher Zareck, 43, tried to attack them with a pole, but the community and homeless advocacy groups are outraged.

In the witness video, ten officers are seen attempting to take the wheelchair bound Zareck into custody.  Three bean bag rounds can be heard being deployed at the helpless man.

“I hear a shot, then a second shot, and I hear the victim yelling in pain as if gargling over something. Then there’s a second pause and a third shot,” said Hubert Jackson, the witness who filmed the video.

Zareck begins to scream in agony and flail his body, as officers swarm around and tase him.

“It seemed by the video it was unwarranted for them to use bean bags and a Taser to take down a gentleman that’s in a wheelchair, especially involving ten officers,” Eric Ares of the Los Angeles Community Action Network, the Skid Row advocacy group that released the video, told CBS.

© AP Photo / David Goldman
Feds Finally Charge Officer Involved in No-Knock Raid That Maimed Toddler
Many are criticising the cops’ use of force, as Zareck could not have rushed towards the officers while holding a pole, and he could have easily been disarmed due to the limited mobility his disability allows.

Eventually Zareck was taken into custody and brought to the hospital for treatment.  After his release, he was charged with suspicion of assault with a deadly weapon.

The incident is currently under investigation, but none of the officers involved have been disciplined.