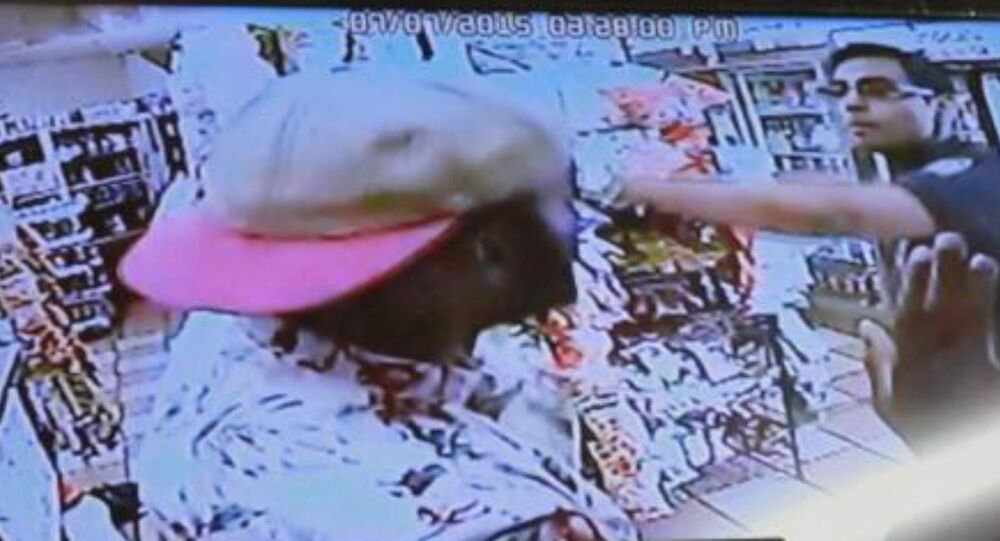 A newly released surveillance video captures a shocking scene as a man with his hands up is brutally beaten by NYPD officers over a suspected theft of a $3 slice of pizza.

Thomas Jennings, 24, a young father and aspiring hip-hop artist, was leaning over the counter at a store in Brooklyn on July 7 when NYPD officer Lenny Lutchman snuck up behind him.  The officer immediately behind shoving him and grabbing at the surprised man’s wrists.

Jennings, startled by what was happening, put his hands up to surrender, and a second officer, Pearce Martinez runs into the store and begins punching him in the head- allegedly without even speaking a word, though there is no sound in the video.

As Martinez continues punching Jennings with a closed fist, Lutchman begins hitting him with his baton.  Throughout the unjustified assault, Jennings remains in a defensive position trying to shield himself from the blows.

Martinez is seen putting his hands behind his back to be cuffed as he continues being dealt strikes from Lutchman, who then proceeds to slam his face down into the counter with his elbow.

“I didn’t ever know it was coming,” Jennings told the New York Daily News.

In his mugshot, Jennings is pictured with a swollen black eye, and had wounds that required five stitches.

“It’s horrendous what they did to him,” lawyer Amy Rameau told the New York Daily News. “He had his hands up. He didn’t pose a threat to anyone in that store. It was an absolute use of excessive force.”

The officer apparently suspected him in a robbery of a slice of pizza and salt and pepper shakers after Jennings and one other man got into a dispute with an employee of the pizza shop over the price of the slices.

Jennings told the NY Daily News that he had been one dollar short and needed to step outside to borrow money and cover his meal.

The pizza shop claims that Jennings friend had pulled out a knife and told them they weren’t paying before fleeing with the pizza and salt shakers.  The employee called 9-1-1 and reported a robbery.

Jennings was charged with robbery and the police reported that he had been resisting arrest and was “flailing his arms.”  He was held for one week without bail, until the District Attorney opted not to present the case to a grand jury.

Lawyers for Jennings are hopeful that the District Attorney will drop the charges, as she explains that there was no robbery.

“He’s an artist, he’s a father, he’s a son but unfortunately the police see him as an object, something to pound on,” Rameau said.

This is not Lutchman’s first time being accused of brutality.  A prior federal lawsuit against the officer’s excessive force cost New York City taxpayers $12,500.

This is also not the first time that Jennings has been roughed up by the NYPD.  He currently has a pending lawsuit against officers from the 81st Precinct who fractured his eye socket while responding to a domestic dispute.