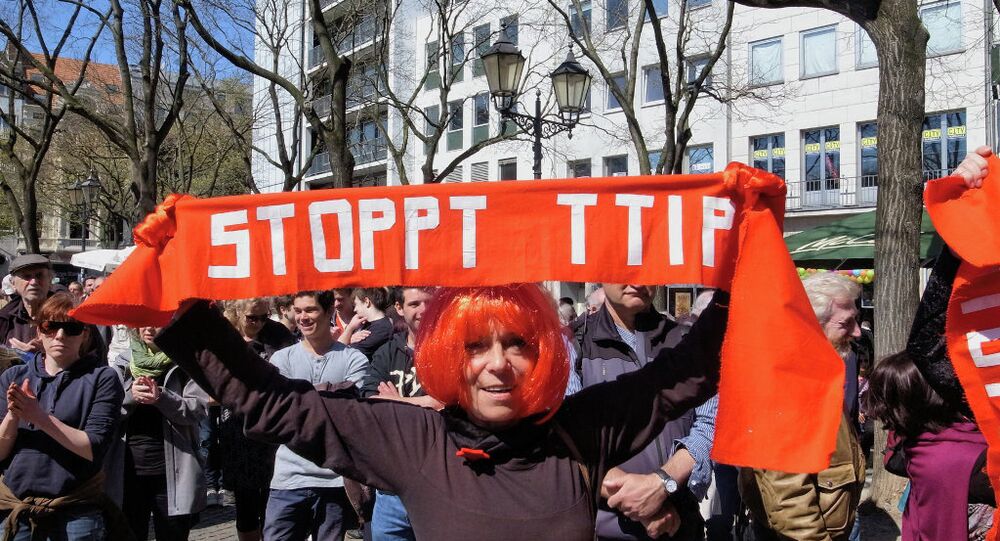 US Seeks to Avoid Its WTO Obligations Using TiSA

Editor-Emeritus of ‘South-North Development Monitor SUNS Chakravarthi Raghavan analyzed US activities in regards to the TiSa agreement and concluded that the US is avoiding its legally binding WTO obligations.

© Flickr / Stop TTIP
Chaos, Secrecy and Fudge Over Transatlantic Trade Deal
After WikiLeaks revealed a negotiated draft of the ‘Trade in Services Agreement' (TiSA), it left no doubt about US attempts to manage trade rules in the post-war world order.

In the awake of the recent BRICS Bank launched by developing countries to counterbalance US hegemony and reform global financial systems, the US appears to be using TiSA agreements to form "a new economic ‘grand enclosure" to keep quickly developing economies from reaching 30 percent of the world's GDP.

Based on the TransPacific Partnership (TPP) and the Transatlantic Trade and Investment Partnership (TTIP) documents leaked to the public earlier this month, we can speculate on the US plan to settle global corporatism and become a financial hegemon. A multilateral world order is a fiction behind which the US is eager to hide.

Following the Trade Promotion Authority (TPA) right to conclude global trade agreements without public and parliamentary review, the US Administration is promoting and negotiating treaties under an umbrella agreement on ‘major issues' in which Congress can only vote positively or negatively, but not amend.

The TISA Scare
Other signatories will be signing on without respecting minimum legislative procedures.

The TISA deal currently negotiated by the US, European Union and 23 other countries has drawn mass criticism over the potential impact it may have on local and businesses.

Speaking at @EU_CoR on #TiSA: trade must be about trade, not about constraining democratic choices made by local authorities

The three treaties (TPP, TTIP and TiSA) have never been supported by the public at large. Moreover, The TPP and TTIP were roundly rebuked over a mechanism for dispute settlement between ‘investors' and the state. Concerns have been voiced by mostly favorable conservative groups, struggling for "free trade".

Some pundits from TiSA member countries considered the TTIP as a threat to their sovereignties. The Member Governments' attempt to obscure unpleasant facts of the agreements caused a stir with even more effect.

"Rather than trying to hide the deal from the British public, ministers should facilitate a fuller debate — and, if such a debate demands it, include the suspension of TTIP in the package of reforms and opt-outs being demanded from the EU," London Evening Standard quoted Ben Goldsmith, a financier and chairman of the Conservative Environment Network, and supporter of a recently launched group ‘Artists Against TTIP' as saying.

Making things worse is a requirement to keep all the documents confidential for five years, no matter they will be ratified or not, however when several governments are included in such an agreement in today's world of wide-spread digital information, there is a little chance the negotiated agreements will be successfully kept in secret, moreover all the agreements are required to have WTO notification right after they are issued.

Launched by the US, the crucial agreement is undoubtedly TiSA, which will definitely hurt developing economies. It is worth mentioning the Marrakesh Agreement establishing the WTO and the General Agreement on Trade in Services (GATS) whose chapters are repeated in TiSA.

© Flickr / European Parliament
The Myth of Global 'Free' Trade
Launched in 2001 by the members of the WTO, the Doha Round, pushed mainly by the US and EU after 9/11, seeks to cut tariffs and farm subsidies, as well as liberalize trade in services — the agenda which appears to frustrate US plans.

The Doha Round finally broke down mainly over the unwillingness of the US to carry out its commitments and obligations, reduce its overall agricultural support and change its trade-distorting policies. So after that, the US reached side accords favorable to them and their allies' interests, thus destroying the development of DDR.

The "Core Text" for the TiSA framework agreement, still incomplete, replicates almost every single word of the multilateral GATS provisions, be they those relating to the definition of trade in services, other definitions, market access, national treatment, scheduling of commitments etc. A significant neglect is the notion of ‘progressive liberalization' as reflected in Article XIX of the GATS.

Old agreements with #ISDS can be used by greedy corporations to sue Govts against national interests. Stop #TPP #TISA pic.twitter.com/LPqTtjf7PW

This makes us believe there was an intention of US and their allies from the very beginning to attract major developing countries to accede the agreement, otherwise there would not be any place holders in the draft for others to join the agreement at any stage.

Leaked negotiated text of the agreement suggests that there is a point of dispute among members on some key issues.

The Core Text and its annexes also do not answer the question of whether such an agreement outside the WTO is legal or not, or even as a plurilateral agreement within the WTO, posing a significant concern.

© Flickr / greensefa
Controversial TTIP Deal to Progress After Europe Votes Yes
According to some WTO documents, binding to all its members, the parties to the planned TiSA are not allowed to make liberalization of their services markets valid only to other TiSA members. Liberalization (i.e. reduction of barriers) in any sector by any WTO member has to be unconditionally extended to all other WTO members, whether TiSA or non-TiSA. This gives developing countries carte blanche to bring the issue to the table and challenge the US and its allies. Moreover, GATS gives any non-TiSA WTO member permission to raise a dispute on the ground of its rights and obligations being impaired, and get a binding ruling via the WTO's dispute settlement understanding.

TiSA members are hurriedly trying to finish the document by December when WTO Ministerial Conference takes place in Nairobi as the current talks in Geneva have not produced any result yet. All these actions can be also interpreted as TiSA members attempting to motivate developing countries who show reluctance because of unstable financial markets.

It's becoming clear the TiSA negotiations are a canny move by US and its "friends" to put more pressure on emerging economies to admit greater liberalisation in developed countries' areas of interest, and have no need to pay for it.